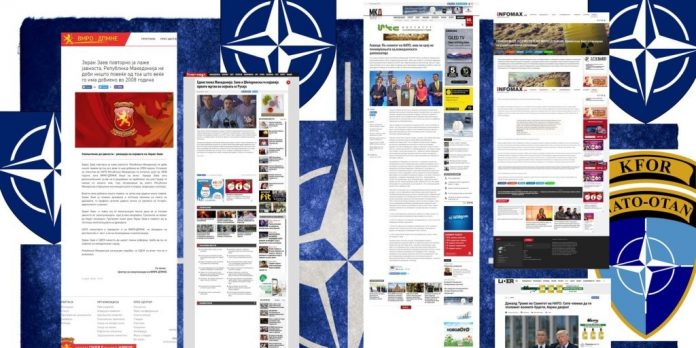 The aspirations of Republic of Macedonia for NATO membership are an effort and top strategic priority since the country independence.  They are a constant subject to manipulations in the public in the endless struggle between the two largest political parties in the country (SDSM and VMRO-DPMNE), and by other smaller “actors” on the political scene (Edinstvena Makedonija, Levica and other NATO sceptics).

In this article we give a list of five manipulations referring to the road to membership in the NATO Alliance, and Macedonia’s membership in NATO, which were quite popular topics in the public, and especially in the online media and the social networks.

Zoran Zaev once again lied to the public. Republic of Macedonia did not get anything more than what it already got back in 2008. Macedonia has fulfilled the conditions for NATO membership back in 2008, when VMRO-DPMNE was the ruling party. (Source:  VMRO-DPMNE, date: 12.07.2018).

In 2008 Bucharest Summit, apart from the strong support from USA, NATO decided to invite Macedonia to become member of the NATO Alliance “once mutually acceptable solution for the name issue is reached within UN”. In Brussels Summit held in July this year, NATO invited Macedonia to become part of the Alliance, greeting the “historic agreement between Athens and Skopje”: “In line with our policy, we have decided to invite the Government in Skopje to begin with the accession negotiations in order to become member of our Alliance”.

Because of Zaev, now the additional condition is not to solve the problem that Greece has with our name, but to relinquish the name Republic of Macedonia and delete the Macedonian history, tradition and culture. (Source: VMRO-DPMNE, date: 12.07.2018).

Why do you put pressure on the public by saying that this is a historic opportunity for NATO accession, when in fact a Summit is not needed if NATO member states decide to accept the country without any extortions, pursuant to the Interim Agreement and the judgment of the UN International Court of Justice? (Source: An open letter to the political leaders in Republic of Macedonia, date: 19.02.2018).

NATO decides with a consensus. Every resolution for new member state must be approved by all member states. In the case of Macedonia, the only country that was against NATO accession was Greece. Whether the reason for that is the name or something else, if there is no consent from all member states, NATO cannot give the invitation.

This is a typical manipulation with the description of the situation since, as in the UN Resolution dated 1993, the Interim Agreement also obligates us to find a solution for the problem about the name with Greece, by means of UN mediation. … accession to NATO is directly related to the solution for the name dispute. So far, no one has succeeded, not even the Court in The Hague, to change the NATO decision.

Macedonia for 16 years participates in military operations abroad, and statistically half of the “children” in the Army of RM have already been on a mission. From 2002 until today, the Army of RM is on NATO mission in Afghanistan – the mission of the International Security Assistance Force – Afghanistan (ISAF) by 2015, and in the new operation “Decisive Support” from 2015 until today. In November 2006, the Government of VMRO-DPMNE eliminated almost all of the “national limitations” for the Macedonian soldiers, including that they cannot participate in military operations.

“NATO membership will cost us dearly…”

The amounts vary from 1.2 million euros per year for the joint NATO budget up to 400 million euros for the budget of the Ministry of Defence, which should be 2% of the gross domestic product, which is NATO’s reccomendation.  However, each year by 2008 Macedonia has allocated more than 2% of the GDP for defence, and after the Bucharest Summit, the defence budget was reduced, in 2014 it was cut in half, while this year it dropped under 1% GDP. Otherwise, the country would have to allocate around 600-700 thousand euros per year for NATO budget.

“NATO will exercise on Krivolak with ammunition with depleted uranium”

The Ministry of Defence immediately denied the information that ammunition with depleted uranium will be used or sometimes was used in Krivolak military training ground, saying that this is disinformation spread before the forthcoming Referendum. NATO , together with the Army of RM exercises on Krivolak since 1993, including the period from 2006 to 2017, when the biggest joint military maneuevers were conducted so far. By August this year, there were no accusations that the allies use ammunition with depleted uranium.

This article was created within the framework of the Project to increase the accountability of the politicians and political parties Truthmeter implemented by Metamorphosis. The article is made possible by the generous support of the National Endowment for Democracy(NED) and The Balkan Trust for Democracy (BTD), a project of the German Marshall Fund of the United States, an initiative that supports democracy, good governance, and Euroatlantic integration in Southeastern Europe. The content is the responsibility of its author and does not necessarily reflect the views of Metamorphosis, National Endowment for Democracy, the Balkan Trust for Democracy, the German Marshall Fund of the United States, or its partners.