The highest officials of North Macedonia, led by President Stevo Pendarovski as the Army’s Supreme Commander, together with government ministers, MPs, foreign ambassadors ,attended the Distinguished Guests Day yesterday at the Krivolak Military Range, as part of the Decisive Strike military exercise.

During the event the distinguished guests could see demonstrations of offensive operations and activities of the infantry and the special forces of the armies of North Macedonia, USA, Greece, and Bulgaria, with the support of North Macedonia Air Force’s WING and Greek F-16 fighter planes.

President Pendarovski stated that with this exercise, North Macedonia once again proves its readiness and interoperability with NATO and is confirming the trust that the allies have in North Macedonia as a NATO member.

This is the first major military exercise that this country has organized as a fully-fledged member of the Alliance.

“Today, we successfully concluded the “Decisive Strike 21” exercise that is our first exercise of this profile and character since we became a member of the NATO Alliance. This exercise is part of the “Defender Europe 21”, the biggest NATO exercise in Europe this year, led by the US Army. We have a double role, both as hosts at the Krivolak Military Range and through our military personnel. This type of participation is the result of the high trust that the allies have in us, in our army and its military installations. We passed our first test! Therefore, as a state, we shall continue investing and developing the Krivolak Military Range, which is no longer only our military capacity, but a range for the entire Alliance.

“Decisive Strike 21” military exercise at the Krivolak Military Range is part of the biggest NATO exercise in Europe this year, “Defender Europe21”. During the Decisive Strike 21, 1,500 members of the armed forces of 4 NATO member countries – North Macedonia, USA, Greece, and Bulgaria – had drills together. The exercise started on the 17th of May and will end on the 2nd of June. The goal of this exercise is a demonstration of the highest level of interoperability, combat readiness . 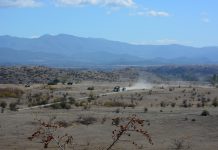 Krivolak will be a key military base in the region