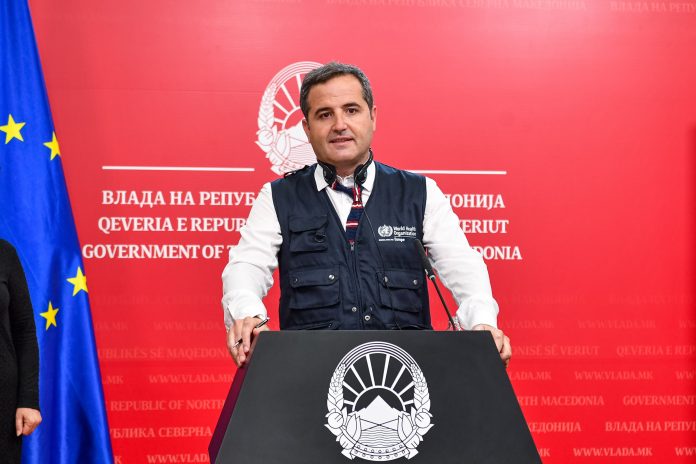 Not only the Government, but also the whole society has to take part in finding the contacts during the early phase, as this is the only way to be ahead of the virus. If this is not done, we shall experience an explosive situation and that will additionally damage the economy. Now is not the time to lower the guard, the isolation of cases and seeking the contacts should continue tirelessly.

This is the message Fabio Scano, advisor to the World Health Organization’s Regional Director for Europe, sent during today’s press conference he held with North Macedonia’s Health Minister Venko Filipche.

In the meantime, the Institute for Public Health registered 153 new COVID-19 cases in the country in the past 24 hours.

-Until an effective vaccine is discovered, we cannot relax. I’m here because I want to get acquainted better with the epidemic in the country and the effectiveness of the measures. In the past three days, I had an intensive agenda. The government’s response was strong and agile, I’m impressed by the doctors’ and medical workers’ dedication. We have an understanding of the social-economic consequences caused by the measures which are causing anxiety because they directly influence people’s lives. The government and the citizens have to help one another. You were a good example of good managing and I think the country can return to that position – Scano stressed.

Regarding the opening of the borders, he pointed out that notwithstanding if there is local or international transmission, the goal is to discover the new cases in time and put them into isolation.

-This virus will not go away. The quicker we lower our guard, the quicker it will return. But, the new cases can be managed. The number of cases will grow, but we will have to learn how to identify the cases – said WHO’s representative.

Filipche stressed that Scano recognized health workers’s efforts and their tireless work and that they talked about the crisis-management, the measures and the transparent reporting.

All border crossings will be opened tomorrow and people will be able to cross the borders without tests and control. The minister said that very few of those quarantined had symptoms.

When asked by a journalist concerning organizing music events, Filipche said that there is already a draft protocol about organizing events, that has to be reviewed.

The Health Ministry informed that in the past 24 hours, 1.279 tests were conducted and 153 new COVID-19 cases were registered. 75 patients recovered and 6 people have died.