Meta.mk
Gallery “Colourful Revolution” tell Government and police: We have attitude instead of fear!

Hundreds of citizens today all part of the “Colourful Revolution” hurled paint at the Government building, the Ministry of Justice and Parliament where they declared that they do not fear police questioning or the police recording them.

The protest was held under the motto and banner “We have attitude instead of fear”. Activist Renata Jajoska and SDSM MP Lidia Dimova both spoke at the protest. 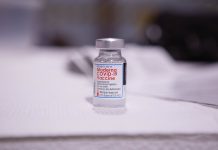 With the current vaccination rates, it will take 6 to 7 years to reach global immunity