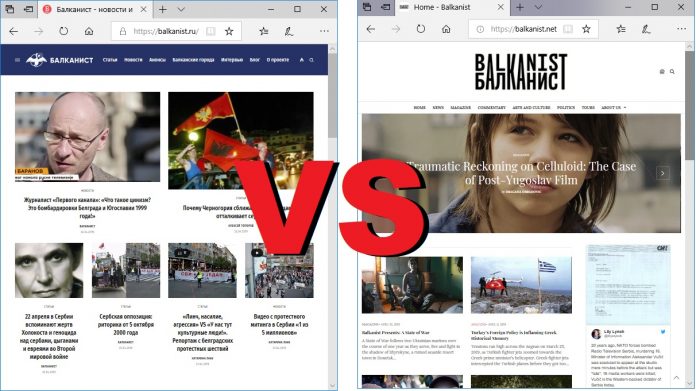 The newsroom of the online magazine Balkanist.net, founded in Serbia, was surprised to find out that they have a Russian doppelgänger (Balkanist.ru) with completelly opposite editorial policy.

Balkanist.net is an English-language platform which since 2013 has been offering news and analytical articles about the Balkans and Eastern Europe by various international authors. The magazine’s editor-in-chief Lily Lunch stated for Mata.mk that ““the Russian-language site has nothing to do with our publication.“

According to the description Balkanist.ru has been founded in September 2018 in order to gather “authoritative Russian balkanists” in one place and steer Moscow’s policies towards this “troubled region.”

On the social networks in Serbia, the appearance of a Russian version of the Balkanist was commented as another attempt to aid the propaganda of the regime lead by Aleksandar Vučić, this time aiming at the Russian public.

For instance, the analyst Miloš Popović commented on Twitter that “Serbian President got his mouthpiece in Russian. It’s called @balkanist2018 and it stole name from the original Balkanist (@Balkanist).“

Serbian President got his mouthpiece in Russian. It’s called @balkanist2018 and it stole name from the original Balkanist (@Balkanist).

The tactics of achieving information dominance a media sphere by filling it with new publications with names that are the same or similar to popular or independent media outlets was one of the features of the propaganda of right-wing party VMRO-DPMNE in North Macedonia. Their populist regime (2006-2017) had close ties with the regimes of Vučić, Orban and Putin. The most visible example is the website Kurir.mk, which still serves as main party mouthpiece. Its name is the same as the Serbian site Kurir.rs, one of the most popular outlets in the region, which threatened to sue for stealing of their brand. In a similar manner, now defunct pro-government “TV Nova” was given the same name as the independent Nova TV. Dozens additional local media were founded in order to flood the social media and news aggregators with misleading contents.

Janjić: The Russian military intelligence service GRU is behind the litany against the EuroPride in Belgrade