“We do not directly broadcast our procedures. When we have something to announce to the public, we will do so in a transparent way,” was the reply of Interior Minister Gordana Jankuloska to the question of META for the criminal charges of disclosing state secrets which MOI announced to file against opposition leader Zoran Zaev.

At one of the press conferences on which he publishes the “bombs”, Zaev accused director of the Security and Counterintelligence Agency (UBK) Sasho Mijalkov that took a commission of more than one million euros for the purchase of tapping equipment from Israel.

When asked regarding the last “bomb” the opposition announced this weekend, where, according to the opposition, Jankuloska with abusive and insulting words indicate certain officials of the government, the minister said that the publication of “designed, created and illegally obtained materials” reflects the “Zaev’s fear and anxiety of crimes for which he is accused.”

– Lacking ideas and specific proposals, Zoran Zaev and his associates have decided to publish created and designed materials obtained illegally as the only way to present themselves in front of the citizens and their every following public appearance projects the fear and anxiety of the opposition leader Zoran Zaev, because he probably becomes aware of the seriousness of the offenses he is accused of. We have ethical and professional relationships with all the colleagues in the executive and the legislative authority – stated Jankuloska.

Asked whether MOI was aware of violations of the headquarters of the opposition, the minister said that the Ministry of Interior submitted appropriate criminal or misdemeanor charges for all incidents that have provided evidence and had some clues and they are confirmed and there were tangible evidence.

– Because you do not point a particular event, I can answer in detail – the minister said. 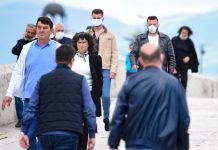 Analysis: Four years on and still no answer on who ordered “Divo Naselje”