Nikola Stojanovski is one of the many high school students in North Macedonia who need an educational assistant, since he has the Down syndrome. The Convention on the Rights of the Child clearly states that education should be provided that will be directed at the development of a child’s character, its gifts and mental and physical abilities to their final limits.

But, for a month, Nikola has been attending the state high school for physical education “Metodi Mitevski – Brico” together with his mother, because the state cannot provide assistants for children like him.

He is an ambitious boy, and by his own words, he plans to enroll at college. His disability didn’t stop him to be a part of the children that recently won tens of gold medals at the inclusive Scientific Olympics for young innovators, and he regularly attends sign language lectures.

His mother Suzana, hopeful that she will be able to find a solution, has timely sent a letter to competent institutions, in which she stated the harsh troubles her son has been facing. So far, she hasn’t received any reply offering a solution, but an explanation that the new Law on secondary education is waiting to be adopted.

Despite being worried about how to find an educational assistant, she considers that her presence during the classes is having a negative effect on Nikola’s communication with the rest of the class.

“The majority of the kids there see a parent that is attending classes and are more withheld than during the second year when he was going with an assistant and he was able to hang out with the kids. The situation is a bit different now, the kids themselves see a parent who attends the classes the whole time,” says Suzana.

At the moment, the educational assistants for some of the high school pupils are provided through the UNPD’s program for the municipality-beneficial work in partnership with the local self-governments, the Employment Agency and the Ministry of Labour and Social Policies.

UNDP stated for Meta.mk that during this year, they have provided support for 50 municipalities that have applied for this program. In a period of 9 months, they hired 584 unemployed people.

Among them, there are people that are providing help to elderly and weak people, people with hearing and eye impairments, people with disabilities and other vulnerable categories.

“A total of 83 job vacancies were opened for educational and personal assistants for children with disabilities in secondary education in 17 municipalities,” said UNDP.

The Ombudsman’s opinion is that each child should have the right to unobstructed and qualitative education, as a basic human and constitutional right.

They Office of the Ombudsman stated for Meta.mk, that on their own initiative, they have started a case in order to monitor the accomplishment of the right to education for children in primary and secondary schools. In the meantime, apart from taking calls from parents, petitions were submitted that indicate the hardships or the inability to provide educational assistance for the children, both in primary and secondary education.

“What is worrisome is that even this school year, educational assistance for the pupils in secondary school will be provided with the support of UNDP through the inclusion of evidenced unemployed persons from Macedonia’s Employment Agency in the program for municipality-beneficial work. Among other issues, this is also due to the information that only several municipalities issued public calls in August for hiring educational assistants for a time span of 9 months and they would receive a payment in the amount of MKD 9 000. Because of that, there is a lack of interest among the potential candidates,” said the Ombudsman’s Office.

The Office also stated that what is also causing concern is the information that the potential candidates that will be delivering this service aren’t evaluated at all on the basis of their professional qualifications and competencies, while they will be providing help in the learning process for children with disabilities. This is certainly a serious task that demands maximum dedication and professional work.

“Without a doubt, the education has a key role in the development of the children/young, which obliges us as a state to create conditions for the accomplishment of this right without any discrimination and on basis of equal possibilities, through an inclusive system of education, to create education that will be in the child’s best interest. Consequently, the lack of educational assistants for pupils with disabilities included in regular schools represents a serious barrier to the unobstructed accomplishment of this right, a problem that needs to be urgently solved,” stressed the ombudsman’s office.

The office considers that an intensification of the activities on the part of the Ministry of Education and Science is necessary in order for a new Law on Secondary Education to be adopted, which will be adjusted with the Convention on the right of persons with disabilities. Hence, the support of pupils with disabilities in secondary education (educational assistance) is to be determined as a systematic solution.

Meta.mk requested an answer from the Ministry of Education and Science about the procedure for the new Law on Secondary Education and when it will be adopted, but it didn’t receive a clear answer.

The Ministry of Education and Science replied that the Law on Secondary Education is in a preparatory phase and this law will provide educational assistance for pupils with disabilities in state and municipal secondary schools.

In the meantime, the Ministry of Education and Science stressed that the educational assistants for secondary school pupils in municipal secondary schools will be hired through a program for municipal-beneficial work.

We didn’t receive a clear answer to our questions from the Ministry of Labour and Social Policy either, which in its turn is part of the program of municipal-beneficiary work. 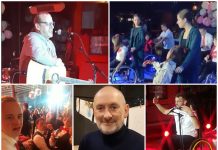