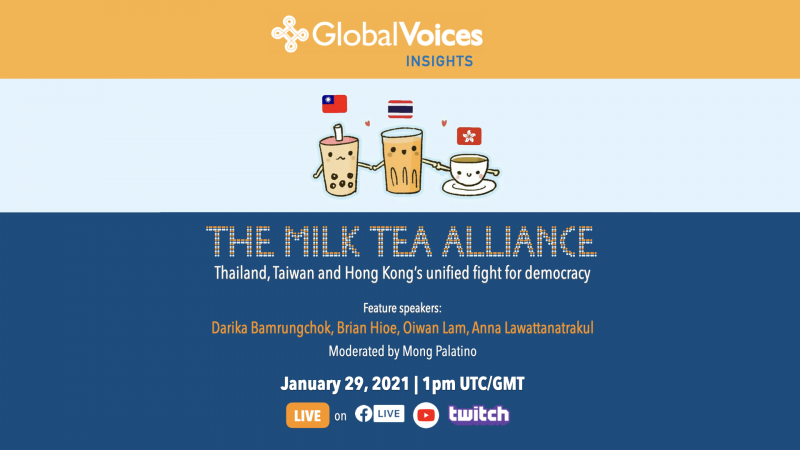 Global Voices on January 29 at 1pm GMT/UTC will host a new episode of the GV Insights series of virtual conversations, under the title “Milk Tea Alliance: Thailand, Taiwan and Hong Kong’s unified fight for democracy”—a lively discussion about the “Milk Tea Alliance” and the impact of this transnational youth protest movement in East Asia and beyond, with experts from Hong Kong, the Philippines, Taiwan and Thailand, as well as with members of the Global Voices community.

The “Milk Tea Alliance” is a netizen-powered initiative that mobilized young internet users and activists in Thailand, Taiwan, and Hong Kong in 2020. It takes its name from a popular drink sold on the street and in cafes in the region. The movement initially emerged in Thailand in defense of Thai social media influencers who were targeted by patriotic trolls in mainland China. Later, it saw Twitter users from Hong Kong and Taiwan expressing solidarity with Thais who were pushing back against Chinese trolls. Eventually, the informal network became a platform in the campaign for democratic reforms, while highlighting the aggression of the Chinese government and its supporters.

The webinar provides an opportunity to examine the origins of the Milk Tea Alliance; its spread and impact in Thailand, Hong Kong, and Taiwan; the response in mainland China; media coverage of the campaign; and its far-reaching consequences in other parts of Asia as well as its prospects in 2021 given that February will mark the first anniversary of the youth-led movement in Thailand, while crackdown intensifies in Hong-Kong and threats are made by Beijing-supporters against Taiwanese activists.

The participants in the discussion are:

The discussion will be moderated by Mong Palatino, Global Voices’ Southeast Asia and Oceania regional editor, who has also covered the events.

The webinar is free and open to the public. The session will be conducted in English.