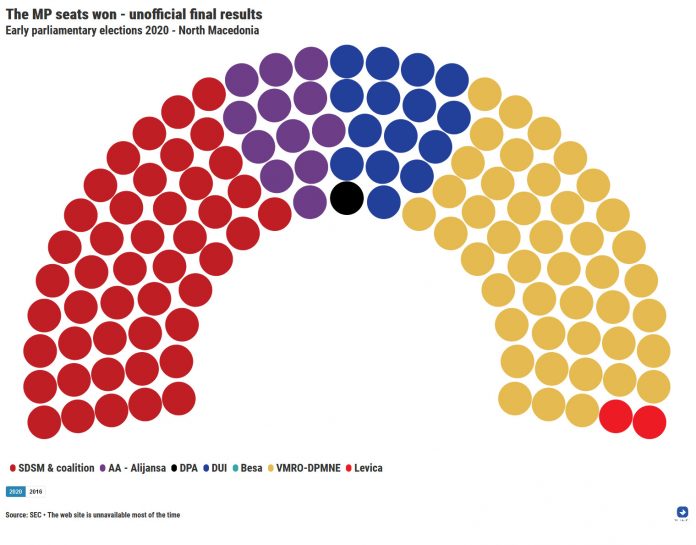 The president of the State Election Commission (SEC) of North Macedonia, Oliver Derkoski, at the public meeting of the SEC, held about 22 hours after the end of the voting process in the early parliamentary elections in North Macedonia, tonight announced the final unofficial results. The numbers of MP seats won by the political parties who participated in the elections are the same as the numbers in the initial unofficial results: The coalition “Mozheme” (We can) won 46 seats, VMRO-DPMNE – 44, DUI – 15, the coalition”Alijansa za Albancite” (Alliance for the Albanians) and Alternativa” (Alternative) won 12 seats, “Levica” (The Left Party) 2 and DPA – 1 MP term.

The Commission unanimously approved the record, which was the final step before communicating the final results to the public.

Derkoski also announced the number of votes won by the parties in the parliamentary elections, which, as he said, has been determined on the basis of the data from the Municipal Election Commissions (MEC), and the entire election material.

As the president of SEC, Oliver Derkoski, said at the public meeting of the Commission, the announcement of the results a little later in the day compared to the previous elections was due to the fact that this time the voting process lasted two hours longer and the Municipal Election Commissions (MEC) took longer to deliver the results to SEC. He stressed that yesterday’s hacker attack did not influence the results, because they are determined only on the basis of the official records of the MECs.

He pinpointed that these are the final unofficial results and there is minimal or no chance that they will be changed by the procedure that follows. The heads of the electoral lists now have two deadlines for filing complaints. The first deadline, for the complaints on the determining of the results is tomorrow at 21 o’clock, and the deadline for complaints on the vote counting expires 48 hours after tonight’s meeting.

Derkoski said that the elections went smoothly, in the midst of a difficult and complicated situation of the pandemic of the coronavirus. He refuted the claims that the hacking attack yesterday will influence the results, because, he said, they are determined in a different proceeding, and not through the data that was published on the web site of SEC. The president of the SEC said that the Commission has notified the Ministry of Interior about the attack, and inspectors from the Department for Computer Crime have come to SEC and started the investigation.

The website with the results, on the other hand, is still out.

“Yesterday evening there was a hacker attack on the system of SEC, that is, our website, which caused no major damage, only a small disturbance. Speculations and fake news, stemming from those speculations, arose. and I, in the name of SEC, refute those. The SEC operates on the basis of the Electoral Code, which stipulates how the results are determined. It is on the basis of the minutes and the records of the MEC, and SEC, in the course of the night and today worked steadily and had been receiving them. It lasted much longer, but for understandable reasons, due to the postponed end of the voting process, and some of the MECs were still delivering the records until lunch. SEC, according to the Electoral Code, determines the results only on the basis of the records and there is no other way to determine the results,” Derkoski claimed.

He assured that what could have been seen on the web site were valid results, but also added that some of the screenshots that showed up on the social networks and in the media, are not taken from the server, but “from somewhere else”.

“This time, SEC has sought to speed up the process by purchasing software application, which has helped us all with the distribution of the results. But, unfortunately, yesterday evening we had a hacker attack and could not publish them. But what you saw in real time was genuine data,” Derkoski claimed. 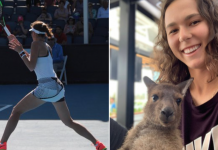