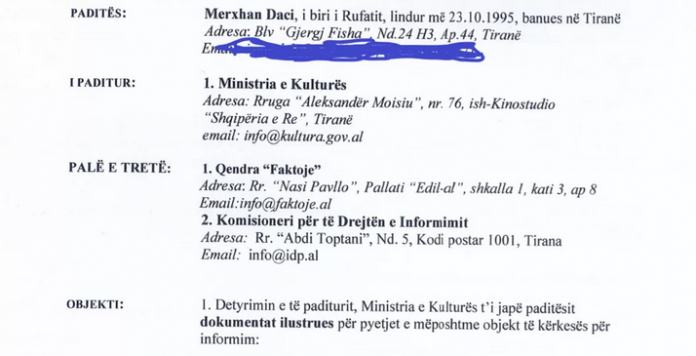 The Administrative Court of Albania decided that the 8 highest state institutions, namely the Presidency, the Parliament of Albania, and several ministries, would provide Faktoje, the fact-checking website in Albania, with information and invoices about the official trips that heads of institutions took abroad. Decisions were made fairly quickly, despite the challenges caused by the pandemic across the system, but the legal battle with the government continues. The unprecedented initiative of Faktoje in concurrently suing all executive and legislative institutions that violated the Law on Right to Information consolidates a practice, which had started in the past.

The invoice process at the Administrative Court

In September 2019, Faktoje sued all ministries (apart from Ministry of Justice and Ministry of Education), the Prime Minister’s Office, the Parliament of Albania, and the Presidency, for violation of the Law on Right to Information No. 119/2014.

These institutions either refused to submit the documentation required by Faktoje about the official trips that heads of institutions took abroad during January 2018 – June 2019, or presented a reply without any illustrative documents (invoices).

The lawsuit, with Faktoje represented by Res Publica Center, more specifically attorney Irena Dule, came about as a result of the ineffective appeals at the office of the Commissioner for the Right to Information. As regards the role of the Commissioner for Right to Information, as the “mediator”, and the body to request information from state institutions and ensure public information, Ms. Dule commented: Which institutions did Faktoje win the legal battle against?

By late 2020, Faktoje had won trials against 8 institutions, i.e. the overwhelming majority of 11 sued institutions, at the first instance of the Administrative Court. For 6 of them, the court decided the immediate execution of the decision. They would provide invoices following the completion of first instance adjudication, although the losing parties (state institutions) appealed the decisions. This is yet another victory, because the immediate execution of decisions happens for a limited number of cases, as explained by the attorney:

“The legislative power stipulated that in special cases, for vital reasons, it is indispensable to immediately execute a decision, without it becoming final. These cases are related to work renumeration, when income is vital and the plaintiff does not have any other source of income and has the obligation to provide for persons with disabilities. Besides these cases, the Court can also assess other cases that are considered vital. Since such cases must be requested and reasoned by the plaintiff, we deemed that the request of a journalist to obtain public information should be met quickly, as information can get outdated, the Court of Strasbourg stipulated in its decisions. Journalists do not request information for personal use, but rather to disseminate it to the public.”

Attorney Dule stated that this practice set another positive benchmark as regards court stances towards cases related to the right to information.

“Most judges deemed Faktoje’s request as fair and ruled that institutions had to immediately provide the requested information, without the decision becoming final. These cases are creating a good practice of courts considering journalists information as vital as food for families is! It must be noted that institutions appealing this decision will “save” them from providing information, because the Court of Appeal takes up to 3 years to judge a case, and this information will no longer be relevant by that time.”

The Parliament of Albania is one of the institutions that, upon court decision, should immediately provide Faktoje with information and invoices about the official trips that heads of institutions took abroad. The decision will be executed by the Bailiff Service.

The Presidency should also provide the required information to Faktoje, after the Administrative Court accepted the lawsuit. The decision is yet to be executed, and the institution has refused the court decision, holding a hostile position against the Bailiff Office, as told by the Attorney representing Faktoje in the process. The case will continue by imposing a citation against the servant, who will hinder the decision execution.

The Ministry of Interior, immediately executed the court decision and Faktoje has obtained the required information with associated documents on the official trips that heads of institutions took abroad, during January 2018 – June 2019.

Faktoje lawsuit for immediate decision execution was accepted by the Ministry of Culture and the Ministry for Europe and External Affairs, and the decision will be executed by the Bailiff Service.

The Ministry of Agriculture provided invoices, while the process was in court, because a request on the same subject was submitted by Res Publica Center.

Meanwhile, Faktoje lawsuit has been accepted by the Ministry of Finance and Economy and the Ministry of State for Diaspora, however, no immediate decision execution has occurred, which means that the all adjudication instances will have to make a decision (which might take several years), if the decision in favor of Faktoje is upheld. Faktoje has appealed this decision, for it requires its immediate execution.

The battle continues with the Prime Minister’s Office and several ministries.

Currently, Faktoje is waiting for the Prime Minister’s Office process completion at the Administrative Court, as the case was dismissed the first time, due to exceeding deadlines, as was deemed by the case judge.

However, this battle continues. This time the plaintiff is Res Publica Center, which has requested for the same information on behalf of Faktoje.

“The case in question showed legislation deficiencies which can improve in the future, both in Law on Administrative Adjudication and Law on Right to Information. Other legislative gaps were noted and communicated earlier in the form of recommendations. Cases reviewed and initiated by Faktoje consolidate the legal practice and identify issues to be addressed.” – the Attorney stated.

The lawsuit against the Ministry of Infrastructure was partially accepted, which means that information about the official trips that heads of institutions took abroad will be provided without invoices attached.

“Lack of full information hampers journalists’ research work and that is why the decisions were appealed.” – Attorney Dule insists.

The same happened to the Ministry of Health, with the lawsuit being partially accepted. What is interesting is not only the partial reasoning (the court reasoning is one paragraph long), but also the use of the same reasoning for the Ministry of Infrastructure as well, although both cases were adjudicated by two different judges.

Below please find the Court reasoning for the case against the Ministry of Infrastructure and Energy.

The Court reasoning for the case against the Ministry of Health

The lawsuit against the Ministry of Defense was dismissed, but Res Publica Center has recently lodged a lawsuit on the same subject, on behalf of Faktoje Center, as it did with the Prime Minister’s Office.

All institutions sued by Faktoje appealed against the first instance decisions of the Administrative Court.

What turned into a legal battle between Faktoje and 11 state institutions, started with a request pursuant to Law on Right to Information No. 119/2014, to verify how taxpayers’ money is spent on official services abroad, starting from plane tickets to hotel accommodation costs.

The request was submitted on July 8th, 2019 to all Ministries, asking for detailed information about the official trips that heads of institutions took abroad during January 2018 – June 2019. The only ministries that provided the full documentation were the Ministry of Justice and the Ministry of Education, Sports and Youth.

On August 23rd, 2019, Faktoje published the first article reflecting  trip costs of the Ministry of Justice. The article was republished in numerous media and caused a lot of controversy among the public and the government, proving the public’s high sensitivity to how their money was spent by government officials, and the latter’s indignation when the media does its job encouraging transparency and accountability.

Upon the article’s publication, consequences followed with the immediate isolation of other ministries, refusing to provide the requested information.

Lacking replies and obtaining partial information without invoices attached, Faktoje turned to the Commissioner on Right to Information, but this step did not bring the expected outcomes either. However, this did not prevent Faktoje from accomplishing its mission and taking legal steps, by taking all institutions that violated the Law on Right to Information to court, including the Prime Minister’s Office, ministries, the Parliament of Albania, and the Presidency. This way, Faktoje marks the unprecedented event in Albania, taking the “state” to court on grounds of violating the Law on Right to Information. The article on invoices was awarded with the second prize by the EU on Investigative Journalism for 2019.