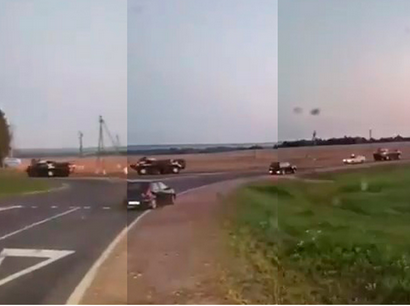 When the social networks and the chat services were flooded with videos containing military transporters and buses full of soldiers, claiming this is the Russian army that has either entered Belarus or “are about to enter” Belarus, the fact-checkers from Belarus have quickly debunked these claims as disinformation.

As was stressed by Franak Viačorka, an analyst from Minsk, and a non-resident fellow of the Atlantic Council’s Eurasia Center and a Vice President of DigiKomNet, an international association of professionals from the digital sphere that is assisting journalists, these claims are untrue. But we must follow the situation closely for new developments, he cautions.

Many telegram channels distribute videos of Russian armored vehicles and buses full of soldiers moving to Belarus or in Belarus already. We fact-checked this information and it is misleading. However, let’s be attentive anyway.

Viačorka’s claims were confirmed by his Russian colleagues, i.e. the Conflict Intelligence Team. They have analyzed a video of BTR 80 APC military personnel transporters convoy which was alleged as Russian. Their checks found out that it is in fact Belarusian paratroopers, moved from Vitebsk to Hrodno under Lukashenka’s televised order the day before.

Yesterday a video surfaced showing a BTR-80 APC convoy inside Belarus, which some alleged was Russian. We believe these were in fact Belarusian paratroopers, moved from Vitebsk to Hrodno under Lukashenka’s televised order the day before. pic.twitter.com/UYn0ux3RAv

On the other hand, a direct cause for the disinformation is the news that Kremlin during the talks yesterday between Vladimir Putin, the President of Russia, and the current president of Belarus, Alyaksandr Lukashenka, has offered military help to his Belarus colleague in order to quell the demonstrations against the election results for which the protesters claim were rigged. Russia has also accused that the protests are an external pressure against Belarus but it didn’t state who is the main actor behind this pressure.

Yesterday, in Minsk, the capital of Belarus, the largest gathering of citizens has occurred and it is the biggest protest in the history of this country.

In Belarus, protests have been happening for over a week since on 9th of August the presidential elections took place. At the elections, according to the Central Election Commission, the current president Alyaksandr Lukashenka has won 80.1% of the votes while his opponent Svyatlana Tsikhanouskaya, who at the moment is exiled in Lithuania, has won only 20% of the votes.

She refused to recognize the election results and accused of rigged elections, which was followed by protests on the streets in many cities in Belorus. The social networks and many of the media show brutal actions by Belorus security forces and the violence over the protesters and activists, many of whom were arrested. There are killed activists. Even today there are protests in several cities in Belarus.