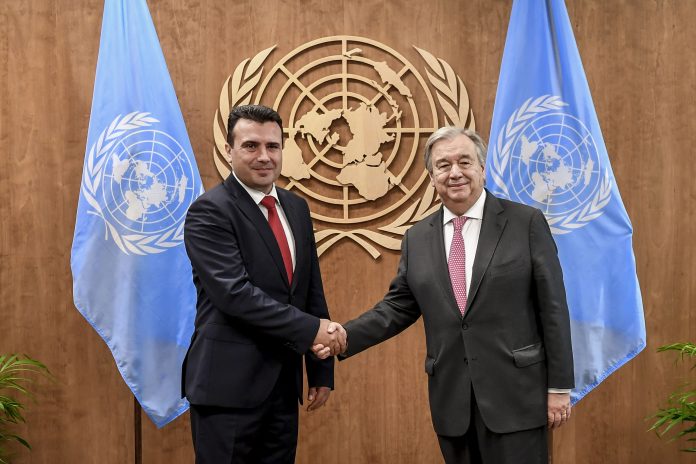 On the margins of the 74th session of UN’s General Assembly has met with the UN’s General Secretary Antonio Guterres, informs the government’s press service.

The Macedonian Prime Minister has expressed great gratitude for the recognition of the importance of the Prespa Agreement in the UN Secretary’s Annual Report. In the report, the Agreement with Greece was marked as a result of the victory of diplomacy and dialogue and is an example for ways of solving disputes on the basis of partnership and friendship.

During the meeting, the UN’s General Secretary Guterres repeated that he admires the Prespa Agreement and appraised it as a historical success that is opening possibilities for the country’s advancement and that the agreement was an important step forward towards the NATO membership and the EU’s positive decision for start of the accession negotiations that is expected in October, informs the government’s press release.

At the meeting, Prime Minister Zaev has confirmed the strong determination that North Macedonia has for effective multiculturalism and for strengthening the UN’s role in the process of solving complex global challenges.