The telecommunications operator ”Macedonian Telecom” has announced today that it has timely replied to all of the demands made by the Special Public Persecutor  and that the operator remains open to further cooperation with the authorities.

“We responsibly claim that we provided answers to all of the SPP’s demands and we remain open to a further cooperation with the authorities. “Macedonian Telecom” is a company that is operating in accordance with the laws, in the interest of the citizens and its users,” as was claimed by the company. 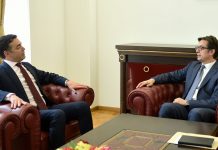