We see them every day, but little that we notice marks and changes that time leaves on their external appearance. When they entered politics, they were all fresh, and after almost a decade of work, long hours, stress and obligations left a mark on their physical appearance.

This doesn’t only apply to our politicians.

The same physical changes are seen among politicians from the region and the world.

Some have no big differences, but others are almost unrecognizable. However, body language and facial expression remained the same in almost all of them.

Although it is considered that some of them use modern cosmetic treatments, it still appears that our politician’s age naturally.

In several years, at this rate, they can replace their political careers with the role of Santa Claus or Mrs. Claus – at least for their loved ones.

The team of “Meta.mk” wishes them more health and wisdom and less stress in the new 2015. Gjorge Ivanov: Time made a compromise and reasonably changed the physical appearance of the professor of political theories after he became President of Macedonia. Nikola Gruevski: He aged everyone with the long government sessions and non-stop work, but the changes are least noticed in him. It is not confirmed whether it is because of the frequent public appearances or regular haircuts. Zoran Stavreski: Numerous investments left marks on his physical appearance. Coping with the global economic crisis occasionally left him without any sleep. Nikola Todorov: The problem with white coats brought him gray hair. He replaced sports with electoral activities and positive lists. Radmila Shekerinska: She is the best example that it is better to be in opposition than in power. Nine years of abstinence from power suite her. Teuta Arifi: Changes her look as often as her political functions. She hasn’t aged despite the polluted Tetovo air. Karolina Ristova Asterud: It’s obvious that she wants to gain the youthful spirit of students. She emphasizes her fiery temperament with similar hair color. Ilija Dimovski: He grew a beard, took off the glasses, exited the Center for Communications of VMRO-DPMNE and now he constantly whips his fellow MPs. Ljubcho Georgievski: His VMRO-style beard is getting shorter and whiter. But, it doesn’t affect his mood. Being in the opposition suits him as well. Stevcho Jakimovski: He is really untouchable. Especially now, when fate merged him with the Government. His hair is gray, but he hasn’t aged. 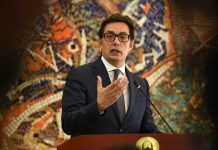 “CRTA”: In the Balkans, Macedonia, media quotes the most “unnamed sources”