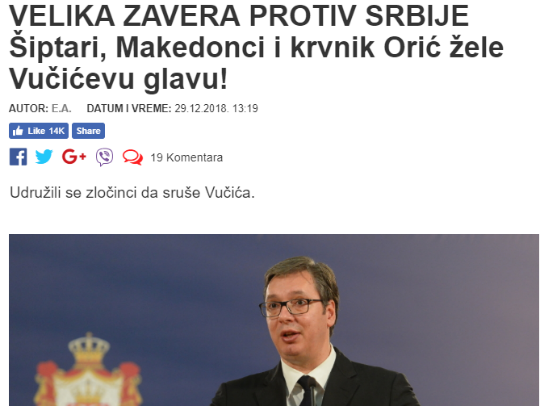 The article “The Šiptari, the Macedonians and Foe Orić want the Head of Vučić ” published on December 29th, by Serbian tabloid “Alo”, who are known as one of the loudest supporters of Serbian President Aleksandar Vučić , accuses the Albanians in the Balkans and the Macedonians of wanting to ruin Vucic’s reputation at any price and presenting him as a commissioner of murder.

Writing about claims made by Naser Orić, a former Bosnian military officer who commanded Army of the Republic of Bosnia and Herzegovina forces in Srebrenica during the war that Vučić wanted to kill him, “Alo” claims that with the details of the alleged plot that brought “Macedonians, Albanians and secret services in those areas, as well as structures acting on the territory of BiH, where Orić is still perceived as a hero, have only one goal, and that is to force Serbia into a corner and to take down the government” .

However, according to what is cited elsewhere in the article, it is a Macedonian intelligence officer who gave Orić information that Vučić and the head of the Serbian security service BIA allegedly discussed his liquidation in an office. The same information “Alo” says, was given to Orić  by “a very influential Albanian” who was at The Hague for crimes against Serbs.

But from a Macedonian intelligence officer and an Albanian, if indeed they were involved in the case, to the claim that Macedonians and Albanians and other structures want to bring down Vučić and work against Serbia, there is a huge overwhelming gap. Especially in this case where the plot to kill Orić is very real.

Therefore, claims by “Alo” resemble only an attempt to spread hatred, which is supplemented by the groundless assertion in the text that “from various addresses in the region, some accusations have been received at the expense of Serbia and its authorities.” 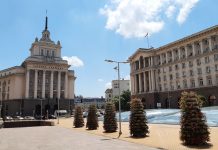 Census results: 3,504 Bulgarians reside in North Macedonia and only 762 speak Bulgarian at home