The Public Prosecutor’s Office have launched a preliminary investigation and have requested that Ljupco Stojanovski be remanded into custody, who yesterday fired a gun at the former Minister of Health, Nikola Todorov.

“The suspect is being charged for two crimes, murder under Article 123 in relation to Article 19 and the illegal manufacture, possession and sale of weapons or explosive materials under Article 396 of the Criminal Code. The competent public prosecutor has submitted a proposal that the suspect be remanded into custody, because they believe that the legal basis has been met for such detainment”, read the statement.

Stojanovski is the grandfather of little Tamara Dimovska, who died while waiting for the Health Insurance Fund to finance and approve her surgery abroad, was taken to the Criminal Court, where a judge of the preliminary procedure will decide whether he will be remanded into custody.

The attack on Todorov, who was not injured in the attack, came one day after VMRO-DPMNE MP Dimitar Stevandzija took advantage of little Tamara’s case to gain political points and to attack the proposed government by SDSM. 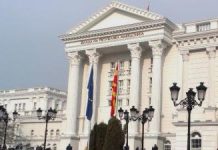