The State Environmental Inspectorate of North Macedonia fined the company Paper Mill from Kochani €20 000 and tasked it to install a filter in a period of two months to prevent the air pollution with PM10 particles from its smokestacks. The municipality of Tetovo may also be fined, because despite the warnings that the reservoir for drinking water in the city is left unprotected and endangered from the works on the small hydro power plant Leshnica, it didn’t take any measures to protect it.

The company in Kochani was inspected last month, when it was revealed that the monitoring was conducted by an unaccredited laboratory and when an extraordinary measuring was conducted and it showed that the plant is polluting with emissions of dust and carbon monoxide above the safe limits.

The Inspectorate’s Director Ana Petrovska informed yesterday that in the past period, the State Environmental Inspectorate has conducted 124 inspections, out of which 28 were extraordinary, and has issued 47 decisions for removal of irregularities, two violations, two bans for burning waste, and three proposals for fines. An extraordinary control was conducted at Zhelezara’s (Skopje Iron Mill) yard where it was stated that a number of installations are operating without surveys, which will have to be prepared as soon as possible.

The inspectors have asked that the Remondis Medison company’s Survey for the protection of the living environment for the treatment of medical waste be annuled, since they discovered serious flaws. The company should have treated dangerous waste close to three plants for production and stockpiling food, even though the presence of such facility can have a negative effect on the food industry.

Petrovska announced that the small hydro power plants, due to the public’s interest in the protection of the biodiversity and the living environment, will be controlled by the inspectors, especially concerning the observance of the determined biological minimum.

“The inspection over the building of a small hydro power plant at Leshnica last month has determined that the reservoir for the supply of water to Tetovo hasn’t been protected and the construction equipment can pollute the city’s drinking water. With the inspection at the City Hall of Tetovo and the public communal enterprise, the municipality hasn’t submitted a survey for a protective zone which is necessary and if it isn’t submitted before the deadline expires, the city will be fined by the inspector,” said Petrovska. 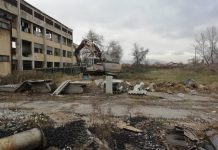