No decision has been made so far to amend the regulation on the imports of used cars in North Macedonia, that will ban the import of vehicles below the EURO 5 gas emissions standard. This is the reply that Meta.mk received from the Ministry of Economy and the Government of the Republic of North Macedonia (RNM) regarding our question about when the announced ban of the import of old heavy polluting cars, trucks and buses will be put into force.

“When this subject is discussed at a government’s session and a decision is adopted, the general public will be informed,” said, in brief, the Government of RNM.

There is no hint from the competent institutions, as well, about the date when the ban on the import of vehicles below the EURO 5 standard will be fully implemented. The Ministry of Economy initially has been promising that the import of vehicles older than 10 years will be banned in 2021, and toward the end of the last year this measure was postponed for 2022. 5 months of 2022 have already gone by and there is no decision regarding this issue.

The final decision about the change of the level of emission of gasses for vehicles that are imported shall be adopted by the government, while the analyses of the regulations that stem from the Law on Vehicles and the determination of technical specifications are done by the Ministry of Economy.

From the moment “the doors were opened” to easier used vehicles imports in 2009, so far, over 400,00 used cars were imported into the country. All of those vehicles are influencing the air pollution, the lack of parking lots, the traffic chaos, and the need for investments in millions of euros for expanding the streets and the boulevards across the cities. Contrary to this, the age of the car fleet in the country has been growing, and it reached a record of 19.4 years in the year 2020.

This spring the results from the Study for proportioning the polluters in Skopje was published, and the research that took place between October 2020 and December 2021, shows that even though the heating with wood is the most significant source of air pollution during the winter, the traffic and the industry are sources of pollution during the whole year. At the most polluted location in Skopje – Lisiche, the measuring has shown that the traffic is the second most important source of pollution.

A slight decrease in the number of imported used cars was noticed in the first three months of 2022, compared to the previous years. During the first quarter of this year, 5,558 used cars were imported, but this decrease happened in a period of an enormous rise of the prices of oil products especially the diesel, and the period when the Russia war agresion on Ukraine erupted. Out of the imported used vehicles during the first 3 months this year, 4,958 are cars, 537 are trucks, and 63 are buses. 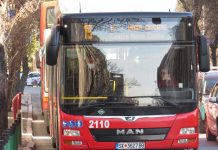 North Macedonia pays highest prices for methane in the neighborhood, even though Gazprom lowered its price by 13%