At its 78th session, the Government adopted a decision on the Republic of North Macedonia’s participation in a NATO mission in Kosovo – KFOR, informs the government’s press service.

By the end of 2020, a platoon and commanding staff (up to 45 personnel in total) will be sent to participate in a KFOR operation in Kosovo.

On the 27th of March this year, the Republic of North Macedonia officially became a NATO member, and on the 30th of March, the Macedonian flag, as a flag of the 30th ally country, was raised at NATO’s headquarters in Brussels. 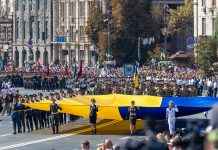