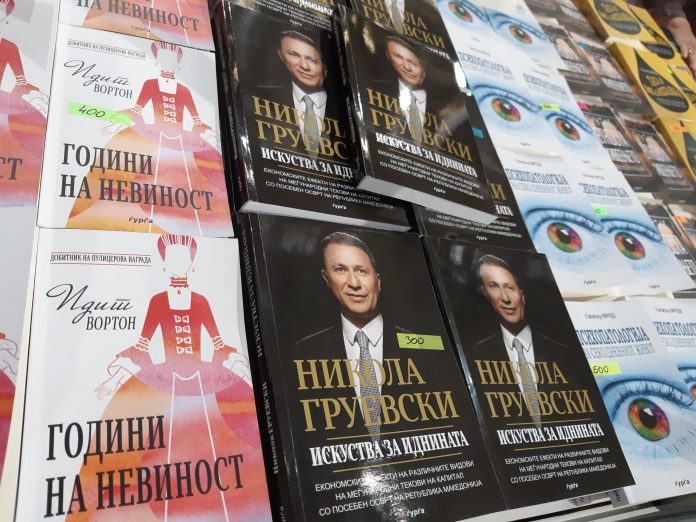 A publisher from North Macedonia known for regularly printing Nazi themed books, created a small sensation at the Skopje Book Fair in the beginning of May, by publishing a book with the doctoral thesis by former Prime Minister and current fugitive from justice, Nikola Gruevski.

The publishing house Gjurgja has, among others, published Adolf Hitler’s “Mein Kampf” and “My New Order”, as well as collections of Hitler’s and Benito Mussolini’s speeches and texts, with the titles such as “The Jewish Question, Race and Christianity” and “Fascist Revolution,” promoting extermination of groups of people based on their ethnic, religious or other characteristics, covered by the definition of hate speech by Council of Europe.

Allegedly, one of the latest hits of the publisher is a collection of speeches and statements by Vladimir Putin – “Words That Change the World”.

Nikola Gruevski was the leader of the right-wing authoritarian regime that ruled the country for 11 years, which put heavy emphasis on propaganda praising him as an economic genius. He currently enjoys political asylum in Hungary. His book is called “Experiences for the Future – economic effects of the various types of international flows of capital including a particular look at the Republic of Macedonia”.

Most of the text consists of Gruevski’s doctoral dissertation, which he defended in June 2018 receiving a PhD title from the Economics Faculty of University of Sts. Cyril and Methodius in Skopje. The content of the book itself is not so much politically important, except for the foreword that contains misleading and inaccurate information about his flight from justice.

By trying to portray himself as a victim left with no choice but to ask for political asylum in order to save his own life, he repeatedly claims that there is ongoing political persecution against him in his homeland. In fact, Gruevski has been investigated in several cases for misuse of power by the Special Public Prosecutors office, and was already sentenced for two years in prison for an illegal 600.000 euros worth procurement of an ultra-luxurious Mercedes.

His new book was part of the Skopje Book Fair this May and was featured back to back with publications by Nazi and Fascist figures, as well as other books that make up the bulk of Gjurgja production – self-help manuals, memoirs and various conspiracy theories. The publisher claimed that it instantly became a best seller, leaving them with no choice but to reprint more copies.

Gruevski appears to still have a large influence over his political party, right-winged VMRO-DPMNE, judging by the fact that they refused to vote for the deprivation of his mandate as a Member of Parliament. He still holds the title of honorary party president and allegedly had been receiving frequent visits by high party officials at his Budapest hideout.

The Constitution stipulates the automatic termination of an MPs mandate who doesn’t attend parliamentary sessions for more than 6 months, without appropriate justification.  As a fugitive from Justice, Gruevski has been absent without leave since November 2018. However, to officially lose his mandate and stop receiving an MPs monthly salary of over 1000 euros, a vote by 2/3 majority of other MPs is required. The vote passed the relevant parliamentary commission, but the procedure still requires two thirds of  MPs to vote “FOR” at a plenary session.

The books sold at the same book-stand with Gruevski’s explicitly featuring hate speech, justification for genocide and calls for violence. “The bitterest battle today for victory over the Jews is fought in Germany. And exactly ne national-socialist movement is the one which is embracing the obligation to fight against this disgusting crime against humanity”, reads a paragraph by Hitler from the Macedonian edition of “My New Order,” originally written in 1941 while his forces were conducting the Holocaust, perpetrating mass murder of millions of Jews and other human beings deemed undesirable by the Nazi regime.

The Constitution of North Macedonia explicitly forbids censorship, while the criminal act of hate speech is prohibited by the Criminal Code. Even though human rights defenders have publicly warned that these books openly promote Nazi ideologies and genocide, the authorities have tolerated this production after the country’s independence in 1990s.

Publishers of fascist literature have been claiming they are just exercising their right to free speech or that they publish these books as resources for the study of history. However, with the exception of short and often ambiguous disclaimers, such books do not contain precise historical information about the consequence of the exposed claims, conveying  Nazi propaganda in its original form – without marking hate speech, lacking analyses, footnotes or other explanations, which should be used in reference books on history.

Meanwhile in Italy, the Turin book fair banned a fascist publisher, after several reputable authors and a Holocaust survivor who was scheduled to speak at the opening threatened to boycott the event.