The Interior Minister Oliver Spasovski and the Ambassador of the United Kingdom to North Macedonia, Rachel Galloway, had a meeting today at the ministry’s offices where they discussed the successful cooperation regarding the fight against illegal immigration on a regional and international level, informs the Ministry of Interior (MoI) of North Macedonia.

“At the meeting, among other issues, there were talks about the importance of accelerating the processes of meeting NATO’s standards in the country’s institutions,” informs MoI’s press release.

Both sides confirmed their efforts for more intensive future cooperation in all areas to maintain security. 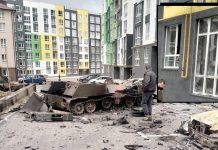