Today, Judge Tatjana Mihajlova stopped the court hearing on the case regarding the violence outside the municipality Center in June 2013, in which the former Prime Minister and current leader of VMRO-DPMNE, Nikola Gruevski, and another 15 people stand accused, and she fined the two prosecutors from the SPO, Katica Janeva and Fatime Fetai 2,000 euros for “contempt of court”.

After prosecutor Fetai was not given permission to address the court by Judge Mihajlova, she stood up and told the judge that she had not come to court to see how pretty she was, and then accused Mihajlova of falsifying court records from the previous hearing.

“In the court records from the previous hearing, you made an intellectual forgery. We request that you give us the audiovisual footage, so we can file criminal proceedings against you, because you in the court records on December the 16th, 2016, falsely indicated that the public had been excluded from the courtroom only when the recordings of the intercepted conversations were played. However, in reality, journalists were expelled from the courtroom and when I as a prosecutor from the SPO submitted my arguments about the usefulness of the “bombs” as evidence”, Fetai said, adding that she would summon journalists to testify in criminal proceedings against Mihajlova.

After this Janeva too stood up and told the judge that she “doesn’t know how to keep records”.

“You should be ashamed that you carry the title of judge and Acting President of the Basic Court Skopje 1”, said Janeva.

After this, Judge Mihajlova stopped the trial on the grounds that there are no conditions to continue with the hearing. She ordered that the entire material from today’s hearing be noted in the court records, and said she would submit them to the Council of Public Prosecutors, and added, which is the institute the SPO answers to.

To this reacted Fetai, who said: “The SPO does not fall under the Council’s jurisdiction, you just continue to break the law.”

While leaving the court, Gruevski and his lawyer, Nikola Dodevski said that today’s hearing looked more like a theatre than a real trial.

The case is regarding the violence which occurred outside the municipality Center in June, 2013, where Gruevski, former Minister for Transport and Communications Mile Janakieski, MP Daniela Rangelova and 11 others stand accused of ordering “slaps” against Mayor Andrej Zernovski. 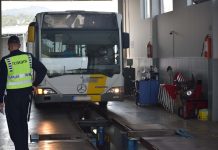