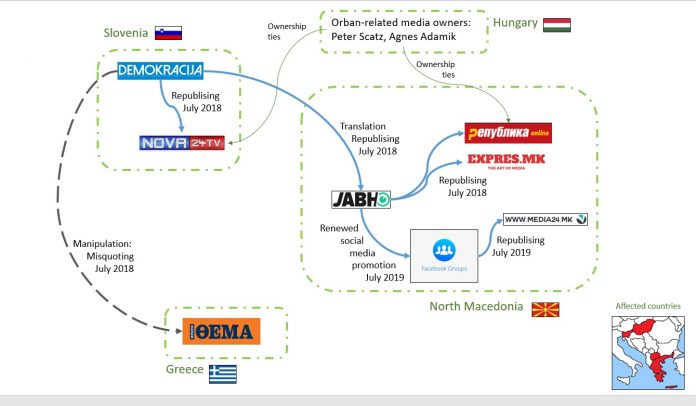 During July 2019 a new trend for spreading disinformation affected the online sphere in North Macedonia. Possibly to compensate for lack of coverage of political events that can be misconstrued during the vacation season, social media were flooded with links to old articles promoted through Facebook ads and right-wing Facebook groups.

Some of these articles were originally published within the same month one year ago. This might indicate intent to mislead casual readers who might glance the date, but not the year of publishing, leading them into thinking the ‘news’ is current.

A case in point is the cross-border disinformation spread from Slovenia in July 2018, alleging that prime ministers of North Macedonia and Greece, Zoran Zaev and Alexis Tsipras have received billions of euros in bribes to make the Prespa Agreement a month before.

This claim had not been substantiated during the following whole year.

However, how this disinformation spread across Balkans borders in the first place reveals a complex network of actors spanning across several countries. The case was analyzed by the Critical Thinking for Mediawise Cititizens – CriThink.mk project as an example of ongoing media manipulations.

The source of the false claim was an article published by the Slovenian web portal Demokracija.si., and  quickly republished by Nova24TV.  Both outlets are part of media network which had received infusion of Hungarian capital by cronies of Hungarian Prime Minister Viktor Orban. Their editorial policies are closely aligned with the views of the right-wing populist Slovenian Democratic Party led by Janez Jansha, Orban’s ally within the European People’s Party. The Demokracija.si article from 9 July 2018, headlined “This is how the Left is doing business: Zaev sold the Macedonians for 30 billion euros,” consists of only two sentences, claiming that the Greek newspaper Proto Thema wrote that the two prime ministers had been bribed by the EU in order to expedite the speedy deal for a dispute that otherwise lasted 27 years. In a manner befitting an opinion piece, using biased language, it accuses “the two die hard lefties” of taking 30 billion euros in bribes for Zaev and “probably” one trillion for Tsipras.

However, no such article can be found on Proto Thema website. This popular center right-leaning Greek newspaper has good reputation in professional journalistic circles, and there’s no evidence that any other media, Greek or foreign, has ever quoted them directly about the would be bribe for the two politicians.

Evidence suggests that the name of Proto Thema was exploited to add credibility to a fabrication, based on distorting a 6 July 2018 news item reporting an statement by Greek MP Dimitris Kamenos.  He said that as an incentive for concluding the Prespa Agreement, enabling consolidation of EU and NATO, the two countries would respectively get 30 billion (North Macedonia) and “proportionally” one trillion (Greece) worth of “projects and investments” in the following years.

The media manipulation involved misrepresenting the expected EU accession and other development funds allegedly slated for the whole countries as personal bribes for the prime ministers.

In North Macedonia, the first to use the Slovenian article to accuse the Prime Minister Zoran Zaev for high treason was the portal Javno.mk, translating the Demokracija.si article verbatim, and adding some unflattering image of Zaev. This article was quoted as source by a range of right-wing media and social media presences in July 2018 and one year later, in July 2019. The international research “From online battlefield to loss of trust? Perceptions and habits of youth in eight European countries” identifies Javno.mk as an example of “disinformation website” “present in Macedonian online space” (pg. 16). The website Javno.mk has no impressum and its ownership is not publicly disclosed.

The Javno.mk article was repeatedly quoted by number of media in North Macedonia, considered mouthpieces of the right-wing populist party VMRO-DPMNE, such as Republika and Express.mk. The Republika article has since been removed from their website, but a trace that they had published it remains on the Daily.mk aggregator.

In May 2018, investigative journalism outlets BIRN and OCCRP uncovered that Hungarian owners of the Slovenian websites spreading right-wing populist propaganda have also gradually bought out Republika and several similar media outlets in North Macedonia, around the time when they made their investments in Slovenia.

CriThink.mk analysis noted that there’s no reason from the standpoint of professional journalism standards such as newsworthiness to revive the old fake news from over a year ago. It documented that the link was shared through several Facebook groups without noting that it’s an old news.

“The posts in these groups, which have several thousand members, have several dozen likes, comments and even more shares each. Many of the comments are very negative, including insults and hate speech.”

These groups, with names such as Hello Macedonia, Macedonian National Interests, and PRIDE IS BEING  MACEDONIAN, mainly include contents against the current government, post supporting the positions of opposition VMRO-DPMNE, as well as posts promoting nationalism, false claims and sensationalism.

Besides many Facebook users, who shared the link via their personal profiles, at least one online outlet, called Media24.mk, became part of this campaign for ‘recycling’ the unfounded claim, republishing a verbatim copy of the year-old Javno.mk article on 14 July 2019. This site has no impressum nor disclosed ownership.

Other online outlets with similar political leanings had been increasing their Facebook presences using paid advertisements, also filling the online space with links to old articles during the ‘dry season’ during the summer vacation period.

The overall effect of this approach is keeping the tensions high among the part of the population susceptible to populist propaganda. It primarily increases the loathing and hate of people who had already been primed to fear the worst from the designated political enemies, which in turn affects all the other members of the public.