The saying “Slow but steady wins the race” maybe is the simplest explanation of China’s slow entry into the North Macedonia’s railroad sector in the past several years. From the takeover of the Piraeus Port in neighboring Greece, through the purchase of locomotives and multiple-unit trains for “RNM Railways – Transport” Public enterprise to the increased volumes of cargo transported by trains and the announcement for construction of a high-speed railroad along Corridor 10, China’s influence in the railroad sector in North Macedonia is growing slowly, but steadily.

Since April 2016, the Chinese state-owned company COSCO has had the majority ownership of the Piraeus Port, in the proximity of Greece’s capital Athens. At the time, the Chinese bought 51% of the shares from the Greek state-owned port operator. By the summer of 2021, China already owned 67% of the shares in the biggest Greek port. Just before the visit of the Chinese President Xi Jinping to Athens and the meeting with the Greek Prime Minister Kyriakos Mitsotakis in November 2019, on the 9th of November 2019, Ocean Rail Logistics, a company totally owned by COSCO Shipping has acquired 60% of PEARL’s (Piraeus-Europe-Asia Railway Logistics) shares. The agreement-signing ceremony was attended by the Greek Minister for Development and Investments, Adonis Georgiadis and COSCO SHIPPING GROUP’s President, Xu Lirong.

RNM’s Railways – Transport’s official documents indicate that in the past three years since the Chinese state-owned company COSCO entered Greece, PEARL. C.A has become the biggest client of the Macedonian state-owned shareholding company in the cargo transportation segment.

From RNM Railways – Transport’s Business Operations plans for 2020, 2021 and 2022, one can see more clearly how PEARL C.A., which is owned by the Chinese company COSCO, through the years has been acquiring an increasing share in North Macedonia’s cargo rail transport.

New railway fleet from China purchased for the railway company

Before the Chinese penetration in North Macedonia’s railway traffic from the last 3 years, the Macedonian state leadership on two occasions purchased a new railway fleet from China for the RNM Railways – Transport.

The former Minister of Transport and Communications Mile Janakieski, together with the former Minister of Finance Zoran Stavreski, on the 24th of June 2014, in the period when the government was led by VMRO-DPMNE, have signed the agreement with the Chinese company CSR for the purchase of 4 diesel multiple-unit trains and 2 electric multiple-unit trains for the passenger transport. This fleet, which was worth €25 million was purchased with a loan from the European Bank for Reconstruction and Development. Mile Janakieski on several occasions was sentenced to jail for abuse of office and authorizations and other felonies.

The Chinese multiple-unit trains have had arrived gradually and the last i.e. the 6th train was brought to Skopje on the 8th of February 2017. The Minister of Transport and Communications at the time, Vlado Misajlovski, together with the director of the state railway operator, Nikola Kostov stated that with the 6 Chinese trains, around 60% of the fleet for passenger transport of Macedonian Railways-Transport will be replaced. Today, this company is named Republic of North Macedonia’s Railways – Transport.

Only a few weeks before that, in January 2017, an agreement was signed by Macedonian Railways – Transport and the Chinese company Zhuzhou CRRC, for a purchase of 4 new electric locomotives from China, with the €8 million loan from the European Bank for Reconstruction and Development. Toward the end of January 2020, RNM’s Railway-Transport has put into use all 4 electric locomotives and at the moment they are used for the cargo railroad transport at the electrified railroad from Tabanovce to Gevgelija, along the Corridor 10.

On basis of the Law on Free Access to Public Information, on the 7th of June this year, Meta.mk filed a request for free access to public information for RNM’s Railway-Transport Business Plan for the year 2022, but we also put a number of questions.

In the meantime, RNM’s Railway – Transport on its webpage published its Business Plan for 2022, as an official document which is from the domain of information of public character, but we received no answers to our questions. Among the other questions, we asked the company’s management whether RNM’s Railway – Transport has received an offer, information, or any kind of expression of interest from any Chinese company for possible future privatization of the state-owned company.

In the meantime, in October 2020, the then Prime Minister Zoran Zaev announced the possibility of privatization of RNM’s Railway – Transport in a package with several other state-owned enterprises which generate losses, but so far, the government of RNM still hasn’t undertaken any official in this direction. As of the 30th of November 2021 the total RNM’s Railway – Transport’s debt to foreign railroad companies and suppliers has risen to MKD3.96 billion (more than €64 million), states the company’s Business Plan for 2022.

Among the other obligations of the state railroad company, as stated in its budget, is a payment of part of the loan for the purchase of the four electric locomotives – €867,860. On the other hand, with the 2023 budget, the state-owned company will have to pay the Chinese company additional €2,489,107 for the 6 multiple-unit trains for passenger transport.

Macedonia “on the road” along the Chinese Silk Road

The project for the construction of the Belgrade-Budapest railroad line along the Corridor 10, initially estimated at $2 billion, started in 2014. The high-speed railroad between Belgrade and Novi Sad was launched on the 20th of March 2022.

As pubished this spring by Radio Free Europe in Serbian, the railroad track from Belgrade to Stara Pazova in the length of 34.5 km was built with money provided by the Chinese Exim Bank, and the construction works were performed by a consortium of Chinese companies.

The second part of the railroad track from Stara Pazova to Novi Sad in the length of 40.4 km was built by the Russian state-owned company “RZhD International” with a Russian loanfor the modernization of Serbian railroads in the amount of $585.5 million.

Serbia took an additional from the Chinese Exim bank, in the amount of €943 million, for modernization and reconstruction of the railroad track from Novi Sad to the Serbian-Hungarian border. The construction works were started on the 22nd of November 2021 and they are performed by the consortium of Chinese companies “China Railway International” and “China Communications Construction.” The Serbia and Hungarian authorities announced that the high-speed railroad between Belgrade and Budapest would be finished by 2025.

The former Minister of Finance and an economic analyst, Xhevdet Hajredini stated for Meta.mk that North Macedonia is a small country and China would never consider investing in the construction of a railroad that wouldo connect Skopje and Gevgelija.

“That railway would enter from Bulgaria or Greece. If China has already arrived here and has managed to enter Greece, it has to come here both by railroad and by a motorway,” explains Hajredini.

However, he says, that the railroad and motorway projects has to connect the country with Bulgaria and the Black Sea and Albania and the Adriatic Sea, so that we can have additional access to the sea. Otherwise, the infrastructural projects and the investments into them well mean burdening the future generations with loans and financial holes in the country’s budget. As an example, he points out the constructed ring road around Skopje, which would have been a good investment for the future generations, but there will be no real benefit from it, he says, for the next 30 to 40 years.

“It was built and generally no one was against it, since it was better to have it, but I’m using this road when travelling from Kondovo to Skopje Sever and I’m not passing any trucks,” says Xhevdet Hajredini illustrating the ring road as a megalomaniac project that wasn’t well thought of.

Hajredini warns that the agreements with China are the most dangerous and he provides an example with the building of the motorways Kichevo – Ohrid and Miladinovci – Shtip, for which the state has to return the loans from the Chinese Exim Bank, if the pay tolls do not bring enough money for the loan payment installments. A prime warning example is Montenegro, which a year ago requested assistance from the European Union in order to be able to return the installments of the Chinese loan that was taken for the construction of the Bar – Boljare motorway.

Apart from the profitability of infrastructural railroad projects, Xhevdet Hajredini reminds of the scandalous arrangements that North Macedonia has already had with the Chinese companies regarding the construction of the two motorways and he pointed his finger toward the corrupted politicians in the country. In that regard, the Special Public Prosecution has opened the case “Trajectory” in 2017 about the construction of the motorways Kichevo – Ohrid and Miladinovci – Shtip, but to this day, the court still hasn’t made a decision against the accused – the former Prime Minister Nikola Gruevski together with the former minister of Transport and Communications Mile Janakieski, the Deputy Prime Minister Vladimir Peshevski and the former Director of the Agency for State Roads, Ljupcho Georgievski.

However, Hajredini reminds that the commercial cooperation with China, through an increased imports or exports, is of interest to our country and no one can object to this, but we are the only ones to be blamed for the mistakes we do.

“China will come and it will be the cheapest around, since it’s a big country and and even it makes loses, it will be not problematic for China. But we do not have the strength to construct and lose with it” warns Hajredini about the profitability and the possibility of constructing big railroad and roads projects in North Macedonia that will be financed by China. 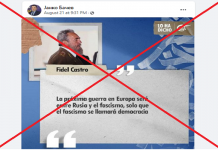 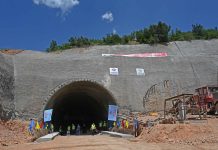