Institutions in the RNM communicate very little with each other through the Interoperability Platform, which is intended for the exchange of data through electronic systems, with the aim of more efficient and faster provision of services. The data provided by Portalb.mk show that, in general, all institutions on the Platform have a decrease in the number of executed transactions, instead of this number being higher.

In the previous story, Portalb.mk showed through concrete examples how not using the interoperability platform exposes citizens to meaningless administrative procedures, which, among other things, have financial costs. Thus, instead of the institutions themselves finding the data and documents through the electronic systems, they oblige the citizens to go door to door to obtain all kinds of “certificates” and papers which cost time, money and effort. MIOA data show that the number of transactions performed by institutions through the interoperability platform during 2020 was over 7.2 million, while in 2022 (until June 22) over 2.4 million. According to the numbers, we notice a declining trend in the use of the platform, and greater use would make services more efficient for citizens.

The Ministry of Information Society and Administration (MIOA) says that the Platform is functional, but the institutions use it as they wish, that is, in this case, there is very little interest.

They announce that they will soon sign contracts with another 20 institutions for the use of this platform.

The digitalization of services, although needed and even necessary, in North Macedonia is delayed and often hindered by bureaucratic questions about laws and procedures, while developed countries are “running” towards technological development. While our institutions deal with certificates, seals and signatures, advanced countries are building systems that facilitate citizens’ access to services, saving time, effort and money. 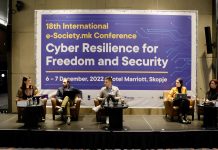