At 66 years of age, Aki Rahimovski, the lead singer, the frontman of the EX-YU rock bank “Parni Valjak” died today. The information of his death was shared by the Parni Valjak Facebook page.

As the Croatian media inform, Ahimovski had a seizure and had been transfered to hospital in Novo Mesto, Slovenia, where he later died. Rahimovski also had a stroke four years ago.

Aleksandar Aki Rahimovski was born on the 5th of June 1955 in Nish. The family soon moved to Skopje.

As a teenager, he was part of several music band, among which are “Vakuum”, “Blood Brothers” and “Thor” and he participated in the Zagreb Festival in 1975.

In the same year, he met the guitarist and composer Husein Hasanefendich – Hus and Jurica Pagjen. In cooperation with the music manager Vladimir Mihajlek – Miha, Aki formed the Parni Valjak music band.

Aki Rahimovski had been the lead singer for 18 albums of Parni valjak. 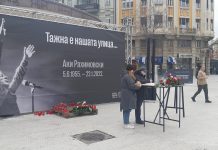