A number of musicians from North Macedonia also paid their last respect the frontman of Parni Valjak music band, formed in former Yugoslavia, which survived the crucible on the Balkans.

“Rest in peace, you great singer and human”; “Thank you for the loving moments in our lives”; “Rest in peace, you angel” and a number of other messages were inscribed in the condolence book today in Skopje’s central square. Some of the citizens lit candles and laid flowers in the square.

The main gathering of the friends and the fans of Aki Rahimovski is scheduled for 18:00 hours today, when choirs, singers and friends will sing together some of Parni Valjak’s greatest hits.

Aki Rahimovski passed away on the 22nd of January, at 66 years of age. He had a seizure and has been transferred to hospital in Novo Mesto, Slovenia, where he later died. Also, four years ago, Rahimovski had a stroke.

Today’s tribute under the motto “Let’s say farewell to Aki with songs” is organized by the Bubamara Radio, with support from KLS Sound and the City of Skopje (Skopje’s City Hall), in the eve of the funeral of the music star in Zagreb tomorrow. 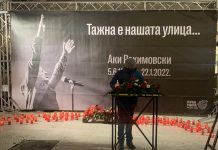 The rectangular fountain on the square put in use