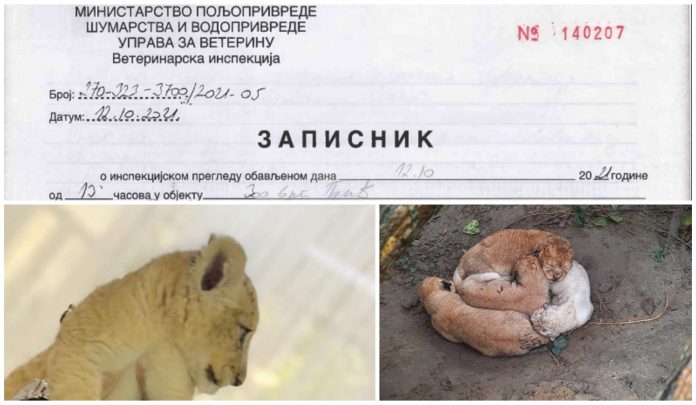 The Zoological Garden in Palić, in the north of Serbia, is analyzing the footage from its security cameras near the lion cages, after the journalists from Suboticke.rs read Meta.mk’s article about the lion cub Simba and sounded the alarm that the cub perhaps comes from this zoo, Sonja Mandić, the interim director of the zoo, revealed for Meta.mk.

In the Palić Zoo this summer the lioness Kiara became a real sensation when she gave birth to 5 lion cubs, one of which was white, which is a rarity. This was the first white lion born in the seven decades of this zoo but also a rare ocurrence in the zoos across Europe.

The happy news about the cub was published with the title “Baby Boom” on the zoo’s web site. Out of the 5 lion cubs, one died at birth. On the 16 and 17th of July, Zoo Palić published on Facebook photographs of the cubs, much to the delight of the visitors.

Though, the only close-up photograph of the lion cubs was taken on the  17th of July. Back then, the cubs were photographed by zookeeper Atila Sadović, while he was checking upon them.

Director Mandić said that since it rarely happens to have so numerous lion liiter, on the 17th of July the people at the Zoo took the lion babies to feed them.

“In nature, a lioness would feed only one or two cubs, so it was essential that we feed them,” Mandić explains.

The next day, 18th of July, the employees on the advice of the veterinarian, returned the cubs to the lion enclosure. But, the morning after that, the lion cubs vanished. The Zoo’s veterinarian concluded that the lion cubs were eaten by an adult male. Their bodies were never recovered.

But, after Meta.mk first published the news about about Simba following the plea by the spokesperson of the Skopje Zoo, Tina Mickovska, the journalists from Subotica suspected there might be a connection between the cases because Simba’s age matched the age of the lion cubs from Palić. After her plea was issued, Mickovska was also worried that perhaps not just one cub, but a whole lion litter, may have been smuggled into North Macedonia.

Since then, apart from being notified by the Public Prosecution and the police that charges were pressed against a citizen from Kumanovo and that upon receiving information, other person’s premises were searched, where taxidermied wild animals were found – tropical monkey and a swan, Simba or any of the other lion cubs, nevertheless, were not found.

Despite the many questions regarding this case, the authorities still haven’t answered whether there are any new suspects or accused, nor how Simba arrived in Kumanovo.

Mandić stressed that if the cubs are found in Macedonia, it will be easy to determine by DNA analysis if these are Kiara’s cubs. So, the director Mandić pleads that zoo in Palić is notified in case there is any information on the Simba’s fate in Macedonia.

Opposite to our institutions’ silence, in Subotica, under the public pressure because of the non-transparency about the death of the lion cubs, Petar Savić, who was the Zoo’s director, on the 20th of October resigned.

On the 2nd of November, Suboticke.rs, received from the zoo the report by the state inspector Jelena Delić, who was in inspection of the zoo on the 12th of October. The report gives the same information that the acting director of the zoo told Meta.mk. On the 16 of July, 5 lion cubs were born and one of them died at birth. The baby lions were taken out to be fed on the 17th of July, and their bodies were not found on the 18th of July in the enclosure where the lions are kept.

Zoo’s acting director Sonja Mandić, who is an attorney, said for Meta.mk she doesn’t believe that someone could have stolen the lion cubs. But, for this case to be solved, analysis of the content of the hard disc from the security cameras near the lions will have to be performed. She stressed that she will check all the circumstances, including the possibility of someone intentionally erasing the recordings. Still, she stressed that there is a possibility that the recordings might have been erased automatically if the memory was full. In that case, the system is erasing the content and starts a new cycle of recording.

Mandić also said that soon she will notify Meta.mk should there be any new findings.

In the meantime, Suboticke.rs newsroom has requested from the prosecutor and the police in Subotica to say whether they act upon the information that Meta.mk has published last month and the disappearance of the bodies of the lion cubs in the Zoo.

Since the start of the story about Simba, one of the people who published a video on TikTok network, where he can be seen driving Simba in a luxurious car, told us that he drove the lion cub in Kosovo, with permit from the owner of the “Maja e Zezë” resort in Gjilan. This was refuted by the employees there, with whom Meta.mk spoke, but also by Afrim Mahmuti, representative of the organization for animal welfare in Pristina Four Paws.

He said that Kosovo is a very small country to hide a lion and so far, no lion cubs were discovered there. Mahmuti stressed that the adult lion Johnny, who lived in the “Maja e Zezë” resort, for which the European Union reacted, was located very quickly. But, he reminded that in Albania, in the village Rushkul, there are still private Zoo gardens where the lions are kept in miserable conditions and from there they end up in the hands of smugglers of wild animals.

Meta.mk is extending its investigation about Simba and the lion cubs from its lair even to other countries in the region. Our online investigation of the profiles of the people who were publishing photographs and videos with a lion in Macedonia showed that among them is an employee at the Customs services, one person working at the Ministry of Culture of the Republic of Macedonia and an army employee. After the series of news about Simba, their profiles on social networks were changed and most of this data was erased. 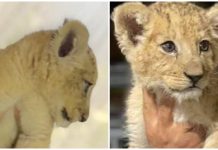