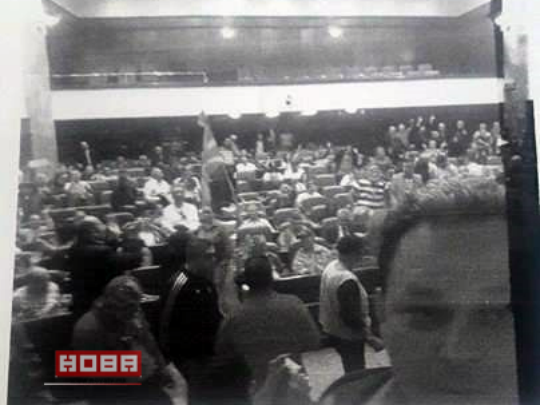 Goran Živaljević, the Serbian intelligence officer who photographed himself in Parliament during the brutal violence on 27 April, 2017, has been in Sarajevo since the beginning of November, this year, at the Serbian embassy.

The first position – ambassador – is carried out by his boss from May this year, former director of the Serbian security and intelligence agency – BIA, Aleksandar Đorđević, reports “Radio Sarajevo”. This media outlet who released statements regarding the involvement of the Serbian secret service in the violence in Parliament on April 27, recalls that the Basic Public Prosecutor’s Office is considering interrogating Živaljević for his role in the attack.

“Is a Macedonian and Montenegrin scenario being prepared for BiH?” Asks the headline in “BH Vijesti”, reporting on the story.

In an article by “Radio Sarajevo”, dedicated to the relocation of Serbian intelligence agents who are in the field and are spreading Russian influence in the Balkans, it is said that another of their “associates” is in BiH.

It is about Miroslav Lazanski, a journalist and military-political analyst who, in the RTRS, the public broadcasting service of Republika Srpska, through a show called “Lazan Direct” continues with the same activities as in Macedonia under Gruevski’s reign, praising the then government.