Farmers from all over Macedonia today in Bitola formed a new agricultural association with pretensions of trade union under the name “Republic trade union association for agricultural salvation.” President of the association is Nikolche Boshevski, a farmer from the village of Novaci, who handles more than 20 hectares of agricultural land and is one of the major producers of wheat and tobacco in the region.

– We teamed up to save the Macedonian agriculture from the selectivity of this Government. The situation in agriculture is catastrophic, prices of everything from raw materials to fuel are increased. We are forced to sell 10 kilograms of wheat for one liter of oil – says Boshevski.

At the same time, the new association also reacts to selectivity in the distribution of subsidies.
– It is unacceptable one producer of wheat to receive subsidies today, while another in six months or after few years. If we are all the same, it should be at the same time. We know that some farmers have priority in receiving subsidies, but we will not allow it – says Boshevski.

The new association of farmers was being prepared for the past five months with program and statute. Now they will go on the field and try to get as much support from Macedonian farmers, who are not satisfied with the work of the Union of Farmers of Macedonia, say representatives of the association.

Six out of eight causes of soil degradation come from agricultural practices, organic production as solution 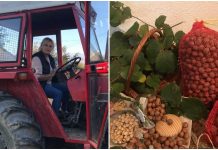