Meta.mk
MKD VMRO-DPMNE seek Law on Amnesty for those who took part in attack... VMRO-DPMNE has submitted a bill for amnesty for those involved and organized the attack in Parliament on April 27, last year.

At a press conference, coordinator of the VMRO-DPMNE parliamentary group, Dragan Danev, said that it was suggested that Parliament should pass the law via a fast-track procedure.

“This law foresees and regulates the manner of freedom from criminal prosecution, stopping initiated procedures and releasing those serving prison sentences, if there is suspicion that they have committed criminal acts: participation in a crowd that obstructs an official representative from performing official action, violence, participation in a crowd and committing a criminal act that is a terrorist threat to the constitutional order and security. This draft law also foresees the removal of convictions for those persons convicted on the day the law would come into force,” said Danev.

According to him, the law will will secure justice for all and achieve true national reconciliation instead of selectivity and divisions and as he says, all this offered by SDSM.

In the court case for the attack into Parliament on April 27 last year, 33 people have been charged. 31 have been charged for causing a terrorist threat to the constitutional order and security, and two for aiding and abetting. 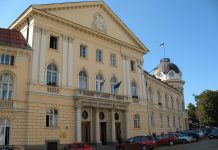