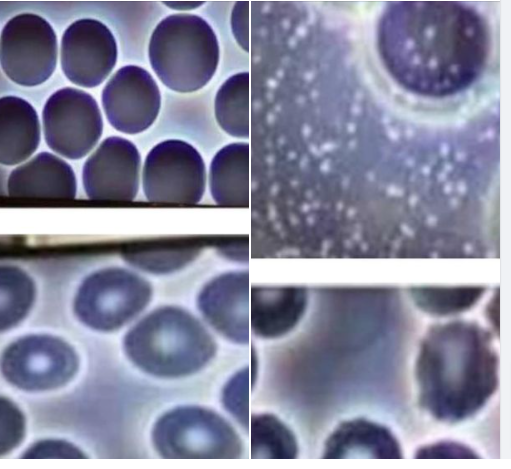 A post on Facebook, without any scientific evidence and facts, is trying to convince the people that if they get a vaccine against COVID-19, their blood count will worsen. This is one of the posts on Facebook that are part of the anti-vaxxer campaign, informs Truthmeter.mk.

The people who have taken a “V” have a worsened blood count! A doctor was comparing the patient’s blood count before and after taking the „К-19 „V“. The first image is of healthy people who have received a V which shows a normal cellular image. The next images show numerous nano particles in the blood count quickly after taking the “К-19-V“. The doctor explains that the body will never be able to free itself from these and the nano particles will enter every cell of the body! This means – the person who has received a “V” will never be the same. What is most frightening is that the expectations are that the people who have received a “V” (which isn’t what it s promoted to be) will live no more than 2 years! , states the post.

What is interesting about the post is that it refers to an article published on beforeitsnews.com website, which is on the list of sites that spread fake news and propaganda, according to usnews.com. This website has no masthead, and in the “About Us” section, it states it is a platform where anyone can publish if he or she has an interesting story and if he or she registers.

The post claims that the vaccine against COVID-19 is worsening the blood count, i.e. the condition of the blood, and that this was determined by a doctor who compared the blood count before and after receiving a vaccine. Firstly, the post doesn’t mention what vaccine it is talking about. Furthermore, when you click on the link for the “source text”, it becomes evident that the doctor who comes up with these shocking conclusions has no name, there is no statement of hers, it is not clear where she worked, how many patients she examined, there is no data on the age and the gender of the people she took blood from, whether they had previously reported diseases and what jabs they received. Simply put, this post has so much unknown information and it doesn’t offer a single proof! All of this is indicating that these claims are probably false.

That this post has nothing to do with the truth can be ascertained by the fact that the post claims the blood results showed “foreign bodies with white stains i.e. the nano particles”. But, it is incorrect that the nano particles can be seen in the blood. “Nano” means one billionth of something. Nano particles are tiny materials with a size from 1 to 100 nanometers. A nanometer is a unit of measurement for length in the metric system and is one billionth of a meter(0,000000001 м).

The nanoparticles exist in the natural world but they can also be man-made. Because of their sub-microscopic size, they have unique characteristics of the material and the produced nanoparticles can be used in many different areas, including medicine, engineering. A submicroscopic size means that these are too small to be seen even under a microscope. This means that they cannot be detected through a blood examination that a lab technician can conduct.

The post also claims that “the life expectancy of those who received a vaccine to be 2 years! “. According to this post, will all who have taken a vaccine against COVID-19 die in two years!? Even behind this claim, there is no scientific basis.

Seen as a whole, it is eveident that the post has no goal to present evidence and facts, but the intent is to spread the anti-vaxxer campaign, informs, Truthmeter.