Meta.mk
Gallery The dumps at Vardar River bring profit to someone and air pollution... 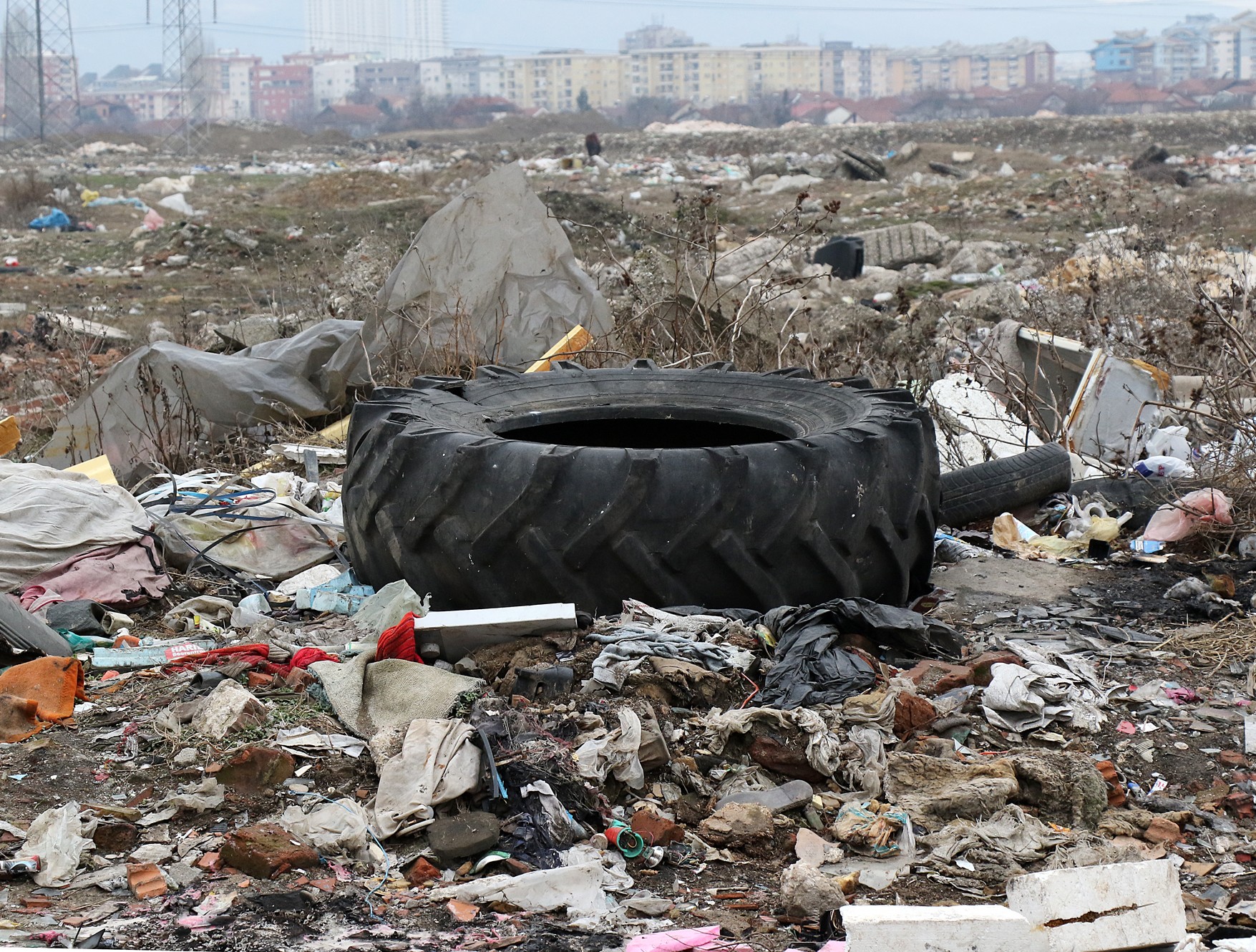 Thick grey smoke rises afar, in the direction of the squat at the foot of Kale Hill, where we are headed together with a team from the City Inspector Office. This is the location where this winter we have on many occassions seen that something is burning and the stench of the burnt rubber and plastics trailed down Vardar River. On cold days and in foggy conditions, the smell of the burnt waste has become part of Skopje citizens`s queasy everyday life.

While we rattle up the uneven road in the Lada Niva of the City Inspector Office’s team, which is made up of one Communal Inspector and one Communal Guard, they explain to us how they proceed in the field when carrying out regular inspections of the numerous black spots on the city’s outskirts in search of the intoxicating fires. “We go out in the field after citizens have called 193 and reported fires, and this is one of the places that is often reported because of the smoke,” says inspector Aco Petrushev, adding that the smoke often comes from the wood stoves in the shanties of the Roma who have lived in this squat for years. But the inspectors do not have the authority to intervene in such cases even though they are aware that various types of waste, plastic, and rubber are being burnt in the improvised stoves.

We have been spotted from distance and are immediately surrounded by many of the residents of the squat, mainly men. There are also children of school age, but none of them attends school, they tell us. “Look, the ones who start the fires have gone, if only you came earlier, you would have seen them burning copper cables, and right next to our houses, they are poisoning our kids!”, Kyamuran, a young man with a groomed beard, a shiny earring and a smartphone peering out of his training suit, tells the inspectors. “We collect waste paper and that’s what we live off, it’s a small wage, one denar per kilogram, but you have to make a living from something,” he says. At the place where something had been burning ten minutes ago, a freshly extinguished hearth is all that remains.

The burning of electric cables to get to the copper wire is one of the most lucrative businesses in the illegal waste collection that takes place across the city. When put in fire, these cables burn quickly, but produce thick, dark grey and heavy smoke, which is extremely toxic and life-threatening if inhaled directly. One kilogram of copper on the black market is worth between 200 and 300 denars, and a bunch of the illegal “recyclers” of cables can earn up to 2000-3000 denars a day. Of course, most of the cables are acquired illegally, through theft, which is a matter of concern for the police.

“Ah, sod the police, officers have been here hundreds of times, and they catch them red-handed, but then they just tell them “take the copper and get lost”, shrugs one of the young people to my question as to why don’t they call the police if in fact someone else is coming and burning waste there. “We know who they are, they are from” Ranka Milanovic “(one of the facilities for accommodation of Roma families from the squats around the city, author’s remark) and they come with metal rods, they want to start fights and cause trouble” …

While we talk, a van with Gostivar registration plates parks 50 metres behind us. “It’s them, we will try to surprise them, get in the car!,” says inspector Ace discreetly. We say goodbye to the residents and continue along the road that traces along Vardar River, in the direction of Momin Potok. We speed up and go around along the boulevard Nikola Karev and approach the van from behind. From the slope under the US Embassy, the distinct grey smoke can be seen down the river. We manage to surprise the cable burners in the middle of their “business”. The heap has not yet burnt, but the copper is glowing, and can be noticed easily. The nauseating stench makes the air sticky, making it impossible to breath. At the same time, on the opposite side of the Vardar River, on the quay, people are exercising, cycling and getting on with everyday life.

A Special Circle of Hell

Most stunned, it seems, is Kyamuran, the guy with the earring, who tried to convince us that someone else is burning garbage in front of his house and poisoning his children. Embarrassed, he moves aside and is silent. The woman we found near the burning cables goes on the offensive. She shouts at the inspector and threatens him, trying to grab the half-burnt cables, to save the copper. “Get off me, I’ll hit you!” she warns. “Who the hell do you think you are?! “The attempt to ID the woman and the man with the groomed beard, who obviously is her accomplice, fails. “We do not have IDs, get out of here!” “In such cases, we have to call on the police to intervene,” says the inspector. We meet an “Alpha” team on our return. They stop us and ask what happened. We tell them to hurry to entrap the perpetrators in the act, and we head towards the old Vardarishte City Landfill.

The Roma squat on the edge of Vardarishte seems to be a few circles of hell below the destitution of the people living under Kale. Patched up shanties with a lot of mud, mixed with rubbish, is the sight that awaits you The clothing of the people is old and worn-out, the children half-naked, with torn shoes. In the neighbourhood, located near the former A1 Television, the homes have been illegally connected to the electricity hubs, and in front of several houses there are pipes with water dripping out. However, the shabby improvisation of the “houses” dominates the view, making the word ‘substandard’ an ugly underestimation of reality. Rummaging through the waste in which they live in, sometimes results in finding plastic or metal they can sell. Whatever they don’t need, goes in fire. The stench of burnt plastics, as well as other waste, hangs in the air. Do they know the smoke is poisoning them and their children, I ask. “We do know, but what shall we use for heating? We need to survive!, they tell me.

“What school? We do not have bread to feed ourselves,” says furiously a middle-aged man who introduced himself as Zenun Chakoli and asks for help for his five children, one of whom is very ill. Why haven’t you called an Ambulance or took the child to the doctor if it’s so bad, I ask helplessly. In the crooked house, three children aged 5-6  years sit on the floor and watch TV. Leftover bread pieces in a cooking pan… I leave behind couple of chocolates and biscuits and walk away with my head hung with shame.

The Dark Zone of the city

The former city landfill had been fenced up with wire, but now there is no trace of the fence, so virtually anyone can walk in and move through the vast area that has never been revitalized. It is still used today as an illegal dumping site, but one is under impression that the state has almost no insight into what actually happens here, despite the regular patrols carried out by the inspectors. To put it simply, the area is the dark zone of the Skopje’s outskirts.

The inspectors greet the residents of the squat; they have known them for years. “I know every inch of Vardarishte and the people there, because I live nearby,” says Ace. Recently, in cooperation with the Municipality of Gazi Baba, a large quantity of tires, which are also burnt for the wires, were seized on Vardarishte. However, there is very little copper in them, and it is not worth their while. Often, it is addicts, who are trying to earn some money anyway they can. They burn the waste under the railway bridge, away from the prying eyes.

Tires, as well as other waste, which they cannot sell, are mainly burned for heating. “Here, on that little gravel hill, we ambushed once…” says the inspector, “but the risk for our vehicle to end up demolished was enormous,” he adds.

We end up our patrol at Vardar River, whose banks, it seems, were recently cleared of the rubbish and is now mainly without illegal waste, with the exception of a large pile of plastic waste, which the inspectors say is already processed, but for some reason the unknown perpetrator unloaded the plastic right in that spot.

Almost within reach, the windows of the buildings in Novo Lisiche start glowing and, although only 400-500 metres away, they seem as a far, far away world.