On the occassion of its 10th anniversary, Portalb.mk news site organized a panel discussion with the subject “The vision about North Macedonia,” that was attended by representatives of civil society organizations, the executive power, the local governments, professors and students.

Portalb.mk’s Editor in Chief, Elida Zylbeari, stressed that Portalb’s voyage began on the 6th of April 2012 and that in those days, there weren’t many online media that created original news for the Albanians in North Macedonia. According to her, the need to have a free, but independent informative portal that would not succumb to various political agendas was evident. It also had to meet the needs of the Albanians in Macedonia as well as the ones living abroad across the world and provide them with timely and correct information.

“Today we are celebrating the 10th anniversary of the founding of a medium that became a powerful institution for the freedom of speech in North Macedonia. Journalism isn’t just a profession, it’s a mission! It’s a mission and an everyday fight for justice, a fight against negative developments, crime and corruption, against any type of discrimination. A constant critical opposition, regardless of who is in power, which is constantly following and criticizing the wrong policies that are at the detriment of the people, and is fighting for the truth to be known, always in defense of the public interest. The Metamorphosis Foundation has to be given credit for helping us to do our job today, freely and without any pressure. During the most difficult moments and at any time, Metamorphosis and its team gave us support and understanding, both financial and professional, “said Zylbeari, who thanked the Metamorphosis Foundation, as Portalb.mk’s founder.

During the panel discussion, all of the speakers stressed the important role and influence that Portal.mk has in the society and the need for this type of media in the country.

Portalb.mk’s columnist Besa Arifi, said that the biggest challenge today is the spreading of disinformation. This way, she stressed, the democracies become controlled and it is assisting authoritarians by abusing the institutions.

“What poses a challenge for the media this year is the false news. In this regard, I think that the freedom of speech, the free and democratic acting are essential. For us, the process of fact-checking and the fight against disinformation is very important. The ideal state is a utopia, but what I want to say is that there is progress. The moment when we started writing wasn’t easy, as it wasn’t easy to face the prejudices, but it was something that had to be done,” Arifi pinpointed.

Also, the columnist Ali Pajaziti in his speech said that Portalb.mk has managed to surpass itself and not only it’s not a simple medium, but it represents an intellectual and academic platform.

“During this period of several years, I haven’t had any corrections, no instructions on what to write about and how to write, unlike other media, that are censoring. I wish Portalb.mk to celebrate its 20th or 30th anniversary. Portalb.mk allowed us all to do mental gymnastics, to be in fine fettle, and during the week to talk and debate among ourselves on the events that are surrounding us,” Pajaziti said.

On the other hand, Malinka Ristevska – Jordanovska – a member of EPI’s board, said that Portalb is treating the important current issues, that are of high interest in Europe, as well.

“What we need is an openness that will help us to think openly. An inner openness and internal and external connections. Of course, I think that they are thinking about the future “an orientation that I see at Portalb.mk are the current issues that have Europe’s attention diverted towards them,” said Jordanovska.

The columnist Salajdin Salihi first thanked Portalb.mk and its Editor in Chief Elida Zylbeari, and stressed that even if sometimes they disagreed on certain issues and opinions, “she did everything for us to express our opinion,” without any censorship.

After the columnists, the guests and the panelists watched a video that summed up some of the most important moments in Portalb.mk’s 10-year history.

Then, young activists and journalists joined the discussion, stating that Portalb.mk is a window enabling them to present their problems and to find solutions for those problems.

Dorina Ajdini began her speech by expressing her gratitude for Portalb.mk’s.

“It’s a pleasure to be part of such a professional team where every day I’m learning more and more. In the future I want to see North Macedonia with a more functional system where the people would be happier,” Ajdini said.

Fisnik Xhelili stressed that he is happy to be a part of one window tof reality such as Portalb.mk where he can make his contribution in this big mosaic such as this news site.

“Throughout the years, Portalb has proven that it really is a window toward reality, a medium that is working in accordance with all journalist standards. Portalb.mk has proven many times that with true journalism we can achieve changes if the majority is following the road and the ways that Portalb.mk has been working, and our society would have achieved greater positive changes,” said Xhelili.

The student and activist Blendi Hodai recalled a personal experience during a certain meeting as part of a conference that took place in Albania, when something had happened in Macedonia, and in the end, in order to get trustworthy and real information, one of the attendees suggested reading Portalb.mk, thus stressing the trust the readers have in this medium.

Era Memetaj said that she is at the very start of the journalistic profession and the area that preoccupies her is the phenomenon of gender equality. She said that in the future she wants to see the women in an advanced position in the society.

Since he was unable to attend the event, the Prime Minister Dimitar Kovachevski sent a telegram and he congratulated the Portalb on its anniversary. In his letter, Kovachevski stressed that on the 6th of April 2012, the Macedonian media area had become richer for an internet medium that is implementing the highest standards of professional journalism.

“With a consistent implementation of the basic principles in the development of your newsroom as a community of journalists, columnists, and civil activists, you have built a unique identity that was recognized by the public, which is worthy of respect and will serve as an example. With maximum adherence to the editorial policy, based on ethical journalism, it has contributed toward the building credibility of a brand that today is recognized as Portalb.mk.

It is recognized as an online news source dedicated to professionalism, openness and determination for the promotion of the progressive democratic values of its time. The passing of true information is very important for the existence and building of a single society and this is why it is important for you to continue with your noble work.

Portalb.mk has become an important source of information in our media space and this is why I wish you to continue to push the limits of your successes and to be the place of informing for many other generations,” wrote Kovachevski in his telegram on Portalb.mk’s 10th anniversary. 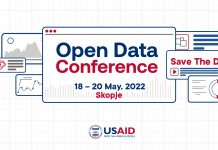