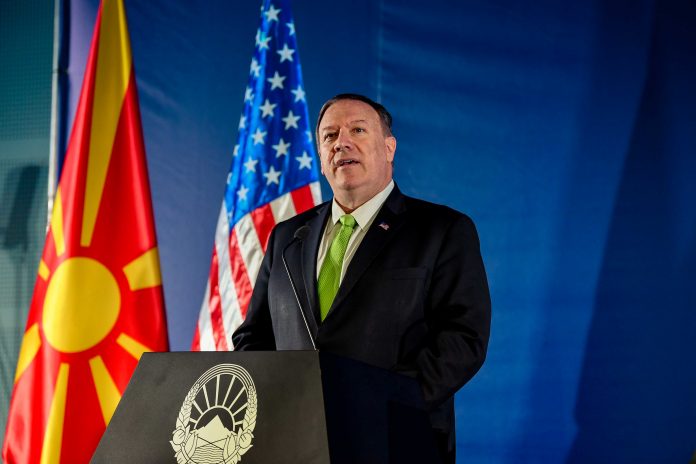 The hearts and minds of citizens of North Macedonia should be leading the state forward, and not Russian bots on social media. I would like to warn you as well as about China’s involvement in the area of sensitive technologies and their strategy of bribery when securing deals. At the UN, President Trump said that the future belongs to sovereign and independent states that will protect its citizens and will respect their neighbors. North Macedonia reflects this spirit. The USA will continue to be your partner for the benefit of your citizens, the region and the world, said the US Secretary of State, Mike Pompeo during his stay in Ohrid, after the meetings with President Stevo Pendarovski and the government delegation.

Pompeo was thankful for North Macedonia’s contributions to NATO’s missions and said that he is convinced that the US Senate this autumn will ratify the NATO accession protocol.

He greeted the Prespa Agreement including the Good Neighborly Agreement with Bulgaria. At the same time, he stated that the fight against corruption is of key importance both for the NATO and EU memberships and for your citizens – said the US Secretary of state.

Pompeo arrived this afternoon at the Ohrid airport, where he was greeted by the Foreign Affairs Minister, Nikola Dimitrov, and from there the Secretary went at the Biljana villa where he met with President Stevo Pendarovski.

USA is our strategic partner since our independence and its support was key in the defense reforms and the transformation of our army with the goal for meeting the criteria for a NATO membership. Through its development programs, USA has helped us in the processes of strengthening our institutions, the rule of law, the reforms in the judiciary, the strengthening of the civil sector as well as a support for a favorable business climate for a trading exchange between both countries” said President Pendarovski.

President Pendarovski has thanked him for the US’ continuous support during the periods when the country was solving its difficult issues regarding inner stability as well as reaching a compromise in the decades-old name dispute.