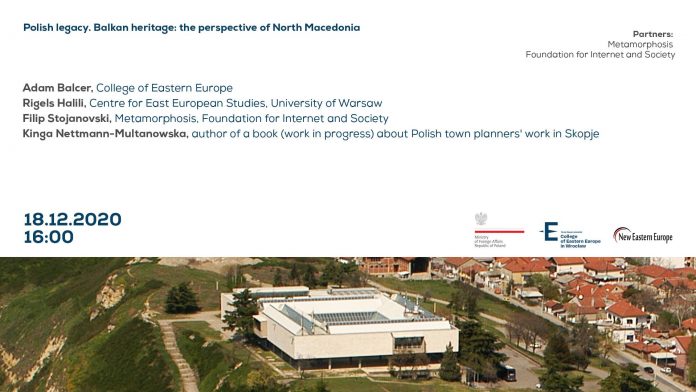 An online public debate organized by two Polish universities will present the legacy of cultural exchange between Poland and North Macedonia and the current context of EU enlargement towards the Western Balkans and its cultural and identity dimension, paying a special attention to Poland’s role in this process.

The event will take place on 18th December at 16:00 via Facebook Live, and will include presentation of the report “Polish legacy. Balkan heritage” which shows “Polish contribution to culture, art and science of the Western Balkans” and is written by Adam Balcer from the College for Eastern Europe from Wroclaw and Rigels Halili from the Centre for East European Studies, University of Warsaw.

Alongside the researchers, participants in the panel will include Kinga Nettmann-Multanowska, author of a book (work in progress) about Polish town planners’ work in Skopje and Filip Stojanovski from Metamorphosis, Foundation for Internet and Society.

In 2015 Nettmann-Multanowska served as production coordinator of the documentary film Skopje. The Art of Solidarity, which examined the part of Poland’s contributions in reconstruction of Skopje after the 1963 earthquake.

The debate is part of series of events which also touch upon other parts of the Western Balkans (Serbia, Bosnia and Montenegro, and Albania and Kosovo), implemented through a project supported within the program “Public diplomacy 2020: A new dimension” co-financed by the Ministry of Foreign Affairs of Poland.