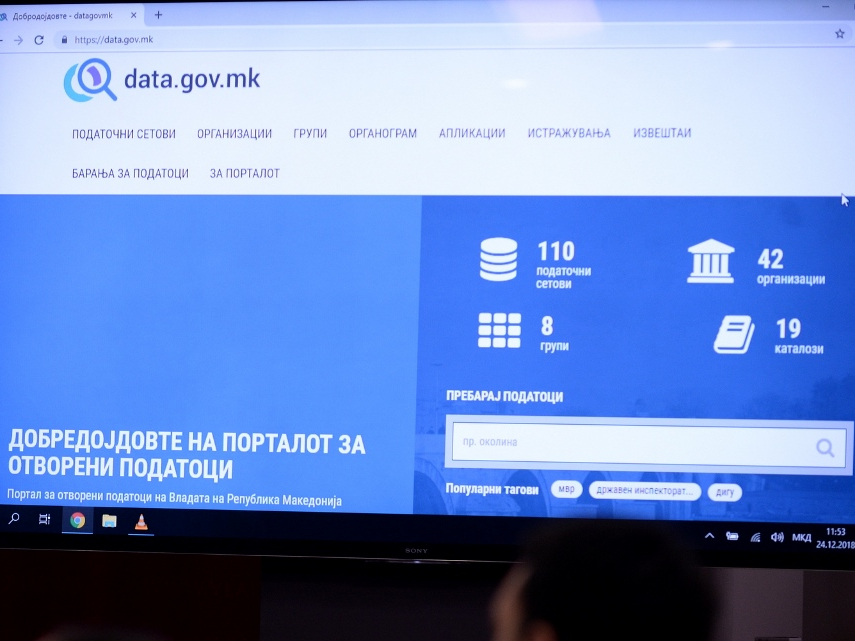 The creation and launch of the new Open Data Portal for the Government of the Republic of North Macedonia is a good step forward, which gives a clear signal of commitment to transparency. However, in order to identify the real potential benefits, it is necessary to open data that will enable the creation of new products and services by the institutions, the civil sector and the business.

The irrefutable fact is that there is political will and commitment in the Government to implement policies for openness and transparency, which, according to British Ambassador Rachel Galloway, stems from the very membership in the “Open Government Partnership”.

Ambassador Galloway points out that besides the new portal, which, by the way, is supported by the Embassy of the United Kingdom in Skopje, a civil budget has been determined, and an open data strategy has been created, which should be implemented. “Transparency should be gradually rooted in society. By paying taxes, citizens invest in governments, which should then show results”, Galloway says, adding that “sometimes for security reasons, information should remain protected – but only that kind of information. ”

She stressed that citizens should know what the government is doing on their behalf and “it can only be done with full openness and transparency about the manner and reasons for making decisions, how these decisions are put into practice and what are the effects of those policies.”

The Ministry of Information Society and Administration (MISA), believe that the launch of the open data portal positively influences the improvement of the administrations services and efficiency, but also influences the Euro-integration processes.

According to Gordana Gapic-Dimitrovska from MISA, the launch of the open data portal is only half the battle. “Data, on its own, most often does not point to anything until they are presented in an appropriate way,” she says.

Therefore, Gapic-Dimitrovska added, the government plans to work on data visualizations and create applications from open data, in cooperation with the business community, which will further stimulate the economy.

At the moment, a few months after the portal came online, 190 open data sets from more than 40 institutions have been posted on the portal.

“This is just the beginning, and the number of data is constantly growing. Institutions are becoming aware of the importance of open data, in each institution we have a duty officer for open data”, says Gapic – Dimitrovska, adding that MISA is actively committed to working on changing the culture of government and the administration, with the goal of full openness and transparency.

The Executive Director of the Metamorphosis Foundation, Bardhyl Jashari, agrees that a change of the culture should be worked on. He said that “in parallel with building awareness that data belongs to the citizens, and not institutions, state employees should be helped to identify and open relevant data-sets.” Jashari points out that the civil sector, as defined in the Open Data Strategy itself, can assist in this process.

He stresses that the portal is a good step forward, but in order to notice the benefits of open data owned by state institutions, there is still a lot of work to be done. “In addition to raising awareness of what is and how open data can be used to make the benefits tangible, data should be opened to enable the creation of new products and services by state institutions, the civil society sector and businesses. The increase of trust in the institutions, which can be achieved and felt only if the data sets that are opened are relevant for citizens, businesses, the media and civil society organizations is an important benefit”, adds Jashari.

By providing an example of good use of open data, British Ambassador Rachel Galloway pointed out that according to the British Open Data Institute, 270 companies and organizations from the United Kingdom produce or invest in open data as a major feature of their work. Up to 70 percent of these companies use data from the British government, such as the Environmental Agency, the Meteorological Office and the National Health Service.

“Data and digital skills are the current and next industrial revolution. We hope that our support for the “21st Century Schools” project and the use of Micro:Bit in all primary schools in North Macedonia and the program we are developing with the Information Technology Chamber of North Macedonia and the National Youth Council for Digital Skills, young people will inspire the next generation in the digital realm and use open data for the benefit of us all”, Galloway says.

Among other examples of organizations using open data in complete different ways are:

CarbonCulture – A platform that helps people and organizations use resources in a more efficient way, thereby reducing waste and saving money.

Arup – A global engineering consulting firm that uses open data and plays a key role in their work.

FoodTrade – An online platform that brings together over 1,600 local food producers with consumers to map the supply and promote transparency in the food sector.

OpenCorporates – Is the world’s largest open database of companies, which contains information on over 100 million companies in more than 115 jurisdictions.