The current general manager of the Macedonian Radio-Television (MRT), Marjan Cvetkovski, out of 12 applications was reinstated as the head of the public broadcasting service, confirmed for Meta, Smilka Janeska, President of the MRT’s Program Council.

On the 26th of January, the Council issued a call for the election of a new director, because Cvetkovski’s mandate is ending in March.

Cvetkovski has been the general manager since 2012. Harun Ibraimi was named as deputy manager.

-The Program Council has made the decision on basis of what was offered int he programs. Out of 13 application for a manager and 8 for a deputy manager, one of each was disqualified because there weren’t anonymous. We presided for 5 hours – explained the president of MRT’s Program Council. 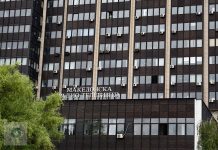 Macedonian Radio and Marjan Cvetkovski were each fined 2.000 EUR for violation of the election silence