The Basic Criminal Court Skopje has declared Macedonian Radio’s First channel, but also the director of Macedonian Radio and Television, Marjan Cvetkovski, guilty for violation of the election silence. The court passed a sentence with fines for JRP MRT 1 in the amount of 1.800 EUR, including 200 EUR fine for Marjan Cvetkovski, who is held responsible, states the published Overview of the violations during the early parliamentary elections 2020 by the Agency for Audio and Audiovisual Media Services (AAAMS).

This ruling arrives upon the filed complaint by the AAAMS for initiating legal proceedings for violation of the election silence by broadcasting of feature stories with statements by the former Interior Minister Nakje Chulev in several daily informative news blocks of the Macedonian Radio’s First channel on the 14th of July.

AAAMS has filed a complaint to the Court of Appeals Skopje upon the Basic Court Skopje’s verdict. Otherwise, the Agency demanded that the Macedonian Radio should be fined additionally with 4.000 EUR including a fine in the amount of 30% of this fine for the Responsible person at the broadcasting service.

Otherwise, apart from the fine issued to the Macedonian radio, AAAMS is waiting for the outcome from the offense proceeding against Alsat-M TV, which was also sued by AAAMS for violation of election silence by broadcasting feature stories on the 13th and the 14th of July about the coronavirus situation and the activities taken by health authorities and by broadcasting a statement by the Health Minister Venko Filipche, who also is an officeholder at the government.

Also, Telma Television was freed of any charges for identical feature stories that were broadcasted during its daily TV news shows on the 13th and 14th of July by the Basic Criminal Court, but AAAMS decided to appeal the verdict at the Administrative Court. Upon this complaint, Telma TV reacted by stressing that it has guided itself exclusively by the public interest when it aired the Health Minister Venko Filipche’s statements regarding the real situation with the COVID-19 crisis in the country. 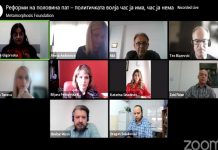