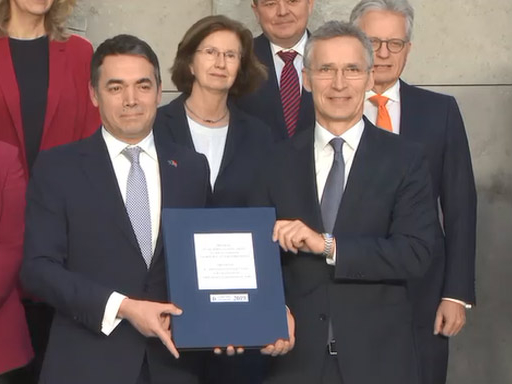 After the signing of the Protocol for Macedonia’s accession to NATO by permanent representatives of member states in Brussels, today Macedonia became part of NATO, however, not as a full member. Until the ratification of the Protocol by parliaments of all the member states, the country will participate in all meetings, but without the right to vote and will not be able to participate in some meetings as further certification of the capacities is required.

At the ceremony that began at 11.02 am, NATO Secretary General Jens Stoltenberg and Macedonian Foreign Minister Nikola Dimitrov entered the hall and both stated that this act comes after a long process and is serious progress for Macedonia and the stability in the region .

“The Prime Ministers of both countries, Zaev and Tsipras signed the Prespa Agreement last year, for long-term stability. It was the beginning of a long road that has brought us here. It hasn’t been easy time, there were challenges and compromises, but the decision to build cooperation brought real results. More stability in the region will bring stability to the wider community. We waited for a long time to receive you. You have been contributing to NATO for a long time. The signing of the Accession Protocol is the beginning of the ratification process and I hope it will be smooth and that we will receive you as a full member very soon,” Stoltenberg said.

Dimitrov, in his address, recalled Macedonia’s path to NATO and said that Macedonia has proven to be a constructive country in developing cooperation and overcoming problems. Despite praising the prime ministers of Macedonia and Greece, Zaev and Tsipras, for their courage, Dimitrov warmly thanked the Bulgarian Prime Minister Boyko Borisov, who he said that together with his government helped Macedonia, first of all with the signing of the Treaty of Good Neighbourly Relations between Macedonia and Bulgaria.

At the end of the signing, as part of a ceremonial gesture, Stoltenberg handed Dimitrov the same pen used by all 29 permanent representatives of the member states to sign the Protocol.