The Liberal Democratic Party today demanded the immediate formation of a special court in the Republic of Macedonia for processing charges by the Special Public Prosecution.

“We want to make it known that this “Swarovski – judiciary” and the system in general, which was built in the last tens years in all levels of the judiciary, was built to meet the needs of Gruevski and the “family”, and all the work and effort from the Special Prosecutors Office for their case “Titanic”, may be for nothing. We emphasize the need for an immediate amendment to the Przhino Agreement by creating a special court with the help of the International Community, which will respect the standards of transparency, independence and the rule of law”, reads the statement from the party.

The LDP fears that charges arising from the Special Prosecutor Katica Janeva will be obstructed by judges who support the “family” and that the ruling party will try to make a farce out of the charges. 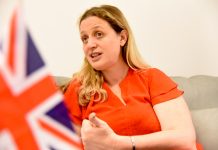 Galloway: North Macedonia has done a lot, but must do more to reestablish the trust in the judiciary

Only 38 percent of the citizens trust the judiciary (infographic)