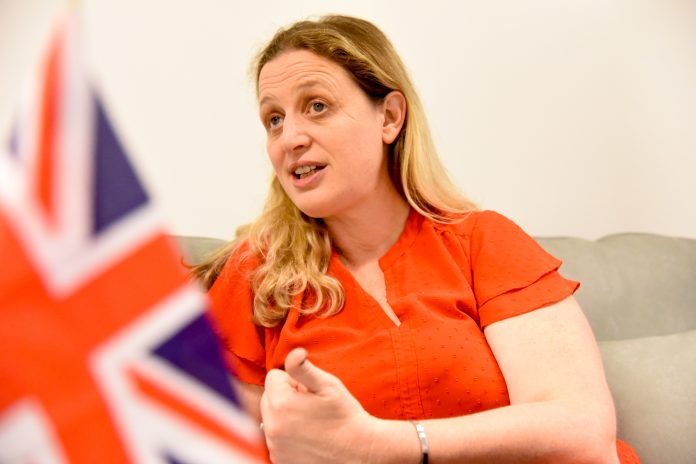 The ambassador of the United Kingdom in North Macedonia, Rachel Galloway in the interview for Portalb.mk speaks about the reforms of the public administration and the judiciary. She stresses that the implementation of the laws and the plans is crucial for reestablishing the trust of the people in the institutions, and that North Macedonia has to strive towards that goal more systematically. She pinpoints to the “Racket” case as a disappointment and explains why she engaged in cleaning the streets of Skopje and her motivation to help the youth.

What is your opinion about the reforms in the public administration?

The first thing that we have to understand is that public administration reform can’t itself be the goal, it has to be a process of reforms. A lot has been done, but the truth is, there is still a lot more that needs to be done. Some institutions are ahead of others, and some of them are not there yet. In your country there are a lots of institutions, ministries and agencies and that’s why reform is going to be such a long-term process. You are going to have to look it strategically: do we need all these institutions, do some of them do the same thing? You can’t make hasty decisions, it would be the wrong thing to do, decisions should be taken after analysis and strategical thinking.

EU reports and experts say the public administration is overwhelmed and needs to be downsized. Also, there is the problem of the influence by the politics…

Yes, you have different problems in different places. In some, you have capacity problems and in some structural problems. That’s why I think the Ministry of Public Administration is trying to look at the problem holistically, bringing support from UK and others, trying to do this in a more strategic way, because you have to meet different problems at the same time.
For instance, it’s a challenge to attract good and skilled IT experts to work in the administration and to get payed as much as they do in the private sector. The public administration needs to provide conditions for them. And in order North Macedonia to digitalize its public administration services so people could apply online for documents, it needs IT people.

There are a lots of plans and actions plans, but people don’t feel the difference in their real lives.

The implementation of these laws and plans is the key, and you have to do that systematically. You are going to get there, but, it takes time so people could feel the difference. To be persistent and to say now that we got the laws, lets implement them, not only on national but also on local level.
We as United Kingdom are supporting a number of different activities in this level, we have invested for quite a long time in that area and we will continue to do so.
We have seen some things which we have supported actually come through such as: Regulatory Impact Assessment, which helps you assess for when a new legislation is prepared; a System of Competence in the administration, to ensure that people are being hired on the basis of merit; and Methodology for Functional Analysis, that helps institutions establish what are meant to be doing, how and who should do it.”

Another painful issue is the reformation of the judiciary in North Macedonia. The new law on the Prosecution hasn’t been adopted and there is the corruption affair called “Reket”. What’s your stand?

The fact is that people’s faith in the judiciary system is incredibly low and has been for some time and have right to demand improvement. This a key good governance issue and people need to have access to independent judiciary. The problem is that, the reforms, just like the public administration, are very complicated and can’t be done quickly. Reforms must be done thoroughly and carefully in order to strengthen institution so they can deliver justice.
There has been progress, we have seen some good laws, the Law on Courts, on the Judicial Council.
The case “Reket” was disappointing but we have to reflect on the fact that action was taken, that an indictment and a process was initiated. If we look back few years, we would ask the question, is that what would have happened? So, you see the strengthening of the system but is necessarily slow, and while it’s happening, it’s very important at the same time to build public trust and that has to do with being transparent: let people see what’s happening in the courts and in the system, give them more understanding of what’s going on.
Civil society has a very important role in all of this also. That’s why we support judiciary reforms monitoring by civil society, so this first of all gives the public access to information but also puts pressure on the institutions to act independently.
Also, there is no reason why progress can’t be made about the law now, to wrap up everything that’s left open and I think that all political parties should come together now and find a solution. It’s not about EU accession, it’s about people’s faith in the system, about them wanting a justice system that works.

There are some failures, cases not ending and people fleeing out of the country it’s not so positive, and I understand the impatience to see these final verdicts.  But, also procedures and rules do have to be respected, and the cases do have to be brought to an end, people do have to see that it has been done properly. If we can see the procedures and regulations have been followed, then you can slowly start to rebuild the trust that is needed for the judiciary system to operate.

A lot of money has been invested for supporting our reforms, yet we are still witnessing corruptive scandals, ineffective administration, bad public services, bad education and so on. What, in your opinion should be done differently and who should do that in order for us to have sustainable positive changes?

There are a number of processes that need to happen to create the change that reform is demanding. Reform is about building change at the institutional level but also about people themselves taking responsibility and changing their behavior. Look at the environment for example, it’s about the people changing their attitude and not only about institutions creating change. But still transparency is crucial, understanding what’s happening in the reform agenda.
The media has the responsibility to report on that, the civil society has the responsibility to follow what’s happening and push for change, allowing citizens to demand reforms because they understand what’s happening and then they can hold their politicians accountable. If the politicians deliver, they will be reelected, and if they don’t, the people will demand change and they can only do that if they see and understand what’s happening.

How can the process of reforms needed for the EU accession, help North Macedonia?

North Macedonia has been a candidate country for a long time, and has reach many reform targets: regional cooperation, good neighborly relations. The process itself it helps in setting targets, it provides a steer in what areas needs to be worked on and it rewards the progress in this areas by opening chapters. My understanding is that France is worried about once a chapter has been closed, then if there’s backsliding, there’s no system for dealing with that. So, if there are changes in the methodology about that, that’s probably a good thing, because if it means that reforms which were supposed to be implemented are no longer being implemented, that will be a push to actually implement them. Also, this brings back my other point, about information, if you have the Commission here doing these assessments it helps the citizens to see what has been and hasn’t been done, helps the government and other institutions to understand what more needs to be done. So the process itself should help North Macedonia and its citizens to improve their lives which is the aim of the reforms.

We have seen that you are a part of the group of ambassadors that are cleaning our streets, why?

Climate change and environment are high on the agenda of UK. We are trying to take a strategic and comprehensive approach to what’s essentially a global problem. In this country here are obviously problems and we are trying to work with the government to take a strategic approach to these problems. You can’t solve environment problems quickly, so in the past we have supported the Ministry on environment into developing its approaches for analyzing the problems for opening the relevant chapter for EU. It’s all about long-term investments and planning. We are also supporting the development of the energy strategy, which is now on public consultation, so it’s an opportunity for the public to comment on what have the experts offered for North Macedonia to have long term sustainable renewable sources of energy. We are also supporting the civil society on the environment.
Furthermore, we believe in direct actions, in setting the example ourselves. Therefore, we join in when people ask us to work on these areas. As an embassy we are trying to go plastic-free, it’s not easy but we try.
Actions and change are needed in many areas, you need long term strategies such as finding the solutions on the renewable energies and much short term actions such as fining the companies who pollute. Also, having personal responsibility is very important.”

You work a lot with our youth. We have seen you in different events supporting youth projects, why?

There’s no future for the country if the youth aren’t engaged, employed, active and don’t stay in here. You need an educated youth who thinks creatively and want to do things and make change.
We have lots of projects, the highlight is the project we launched a few weeks ago, YouthHub.
This project was launched with the president Stevo Pendarovski, he gave the hub, and MASIT and Youth National Council are involved also. The idea is to give youth the digital skills they need for jobs in the 21st century. But actually it goes deeper than that, its about responsibility and community, they have to do community work to pay for this training. It will also help companies to find certain skills they need.
Other projects are in villages and rural areas, we have supported sports activities, local youth debates, cultural activities, chess competitions. Also, we have supported trainings in creative thinking in small communities and young people in developing their creative ideas on achieving something that has a practical worth for them. We support different programs for access to kindergartens and also developing digital skills and teach coding in every school in the country, through our program at British Council.