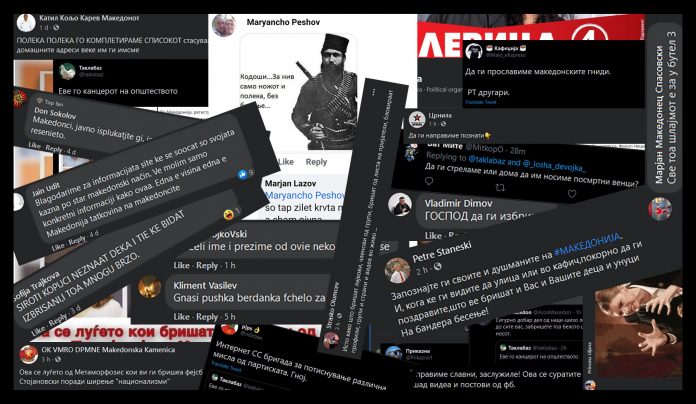 “Here is the cancer of the society,” “slowly we are completing the list, information is arriving from all sides and we already have their home addresses,” “poor bastards, they don’t know they will be erased too, and very quickly,” “should we shoot them or bring funeral wreath to their homes,” “Macedonians, spit on them in public…” “Get to know your own and Macedonia’s foes. And when you see them on the street or at a pub, do greet them submissively for erasing you, your children, and grandsons. Let them hang on lamposts!” “bastards, a riffle is the only solution for them”.

These are some of the comments with threats, full of hate speech, calls for lynching, even death threats for the Metamorphosis Foundation staff in the campaign that began a month ago, when news site lider.com.mk published disinformation titled „These are the people who delete content from Facebook in Macedonia!“.

Because after a month this campaign against the people at Metamorphosis is still ongoing, Meta.mk has requested confirmation from the Ministry of Interior and from the Public Prosecutor’s Office whether any procedure for sanctioning this hate speech, which is a felony according to RNM’s Criminal Code, was started. MOI briefly informed they have sent a Communication to the Basic Public Prosecution Skopje.

“We inform you that the Sector for Computer Crime and Digital Forensics has received three reports on its official email address from the Metamorphosis Foundation for hate speech toward its staff,” MOI replied.

Further on, the reply says: “regarding the reports, in accordance with our legal authorizations, a Communication has been prepared and sent to the Basic Public Prosecution Skopje.”

The Basic Public Prosecution (BPP) confirmed it received Communication from the Sector for Computer Crime and Digital Forensics and that a public prosecutor has issued Order for gathering evidence.

“Toward the end of November, the Sector for Computer Crime and Digital Forensics submitted two Communications to the Basic Public Prosecution Skopje and another one today on the 7th of December. These refer to the interactions on the social networks among certain persons and members of the Metamorphosis,” said the BPPS.

They state that “after analyzing the findings in the Communications, the delegated public prosecutor has issued an order to MOI to make the necessary investigations and to secure evidence. The evidence will tell whether there are elements of a felony that is pursued ex officio or the damaged side will have to seek their rights in another legally binding procedure.”

As a matter of fact, the communication and the interactions between these persons and the Metamorphosis’ staff is occurring unilaterally. These are mainly hate comments, calls for public lynching and threats of physical violence posted on social networks under the published articles or the photograph that was firstly published by lider.com.mk. In certain cases, messages with similar content were sent to Metamorphosis’ staff as private messages on social networks, but also offline, in incidents of accosting by unknown persons in the street, including in front of their homes.

The previous experience shows that the Public Prosecution very rarely reacts accordingly on reports of this type. The Macedonian Independent Trade Union of Journalists and Media Workers (SSNM) stressed in a statement for Meta.mk that the institution of the public prosecutor “has been faltering to act on these cases and to prove them, and that is lowering MOI’s, but also citizens’ initiative, who are filing reports when it comes to hate speech.”

However, the Association of Journalists of Macedonia (AJM) that are constantly monitoring the attacks on journalists, state that they have contacted MOI, and they received an identical reply i.e. that the report was filed at BPP and it is expected an outcome to follow.

Regarding what journalists and media workers can do by themselves in circumstances such as these, the journalist trade union stated that what happens mainly is “a public condemnation of hate speech, appeals for sanctioning the hate speech, raising the awareness of the dangers of hate speech, advocating at institutions for things to change i.e. a legal framework or similar.”

“In brief, the main weapon that journalists and media organizations have is the public pressure and the pointing at the damaging consequences of impunity that exists in a society when it comes to hate speech,” stated SSNM.

AJM, which is the oldest media association in the country, stresses that their basic activity in cases such as this is registering all attacks upon a previously adopted methodology that is used by 6 other media associations in the Western Balkans, including running and updating a registry of every attack or a threat in the previous 6 years.

“Apart from this, we are constantly working on promoting the danger of impunity of attacks on journalists with the help of campaigns, publications, training journalists and lawyers as well, MOI members, judges, and prosecutors. This is especially important because impunity stimulates new attacks, and that is causing self-censorship among journalists,” said AJM.

AJM also said that they are working on increasing the institutional protection of journalists i.e. MOI to be granted greater authorizations in cases when an attack was committed on a journalist and the fines for the attackers to be augmented.

The journalist trade union also stressed that for years they have been trying to indicate the problems that have resulted from the impunity of hate speech and the proposals are directed mainly towards the improvement of the legal framework, defining thoroughly the institutions authorizations and rapid response towards hate speech.

“What is most important is to stop or to lower the impunity when it comes to hate speech since it is the only way to decrease this act which is damaging not only for the journalists and the media workers but for the whole society,” said SSNM.

Political parties are the main instigators of such campaigns

“It is without doubt that the political parties are the main instigators of hate speech, which arises from their fight one with another about various political issues. From there, maybe there is a systematic obstacle for a quicker reaction on part of the institutions, since they are managed by people from political parties that are ruling with the state,” said SSNM.

AJM also states that unlike in the past, when part of the political parties called for media persecutions of the critically inclined journalists and media organizations, currently the situation is more relaxed, but still occasionally there are incidents with certain politicians.

Regarding the actual case of the witch hunt against Metamorphosis Foundation, apart from the hundreds of shares on social networks that were obviously conducted in an organized manner, the photograph of the employees and the Lider.com.mk’s article were published by two political parties at one of its official pages. These included a Facebook page of Municipal Committee of VMRO-DPMNE’s in Makedonska Kamenica and the Facebook page run by Levica party, titled “Lenka”. Even though the posts were erased several days after, the fact is they caused an avalanche of negative comments. 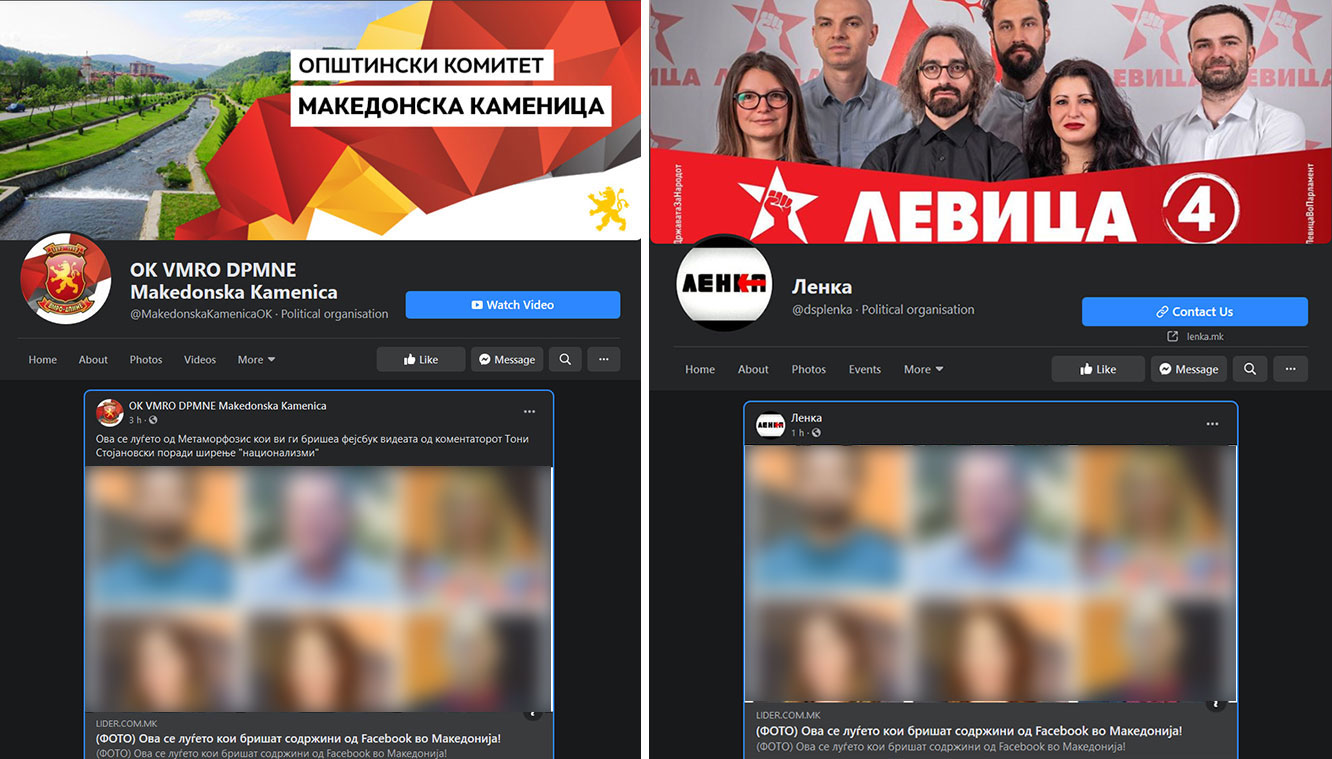 The fact that the disinformation about the Metamorphosis Foundation was shared on the social media profiles of two political parties was confirmed by the independent journalist trade union, stressing that “the act of sharing itself is opening a new area of hate speech.”

“Political parties should not only declaratively condemn the hate speech and demand declaratively from the institutions to react, but they should be a constructive element in the repression. Through its representatives at the Parliament they should be working towards the improvement of the legal framework which would allow easier and more efficient sanctioning of those individuals or organizations that are using hate speech,” said MISJMM.

Meta.mk news agency has sent questions to all major parliamentary political parties including SDMS, VMRO-DPMNE, DUI, Alliance of the Albanians, Besa, and Levica but until the moment when this article was published, we didn’t receive any reply.

Together with MISJMM and AJM, there was a reaction about this case on part of the Macedonian Institute for Media as well the Council of Media Ethics of Macedonia , which issued a joint press release that called on MOI and the BPP to take appropriate measures. Also, there was a reaction on part of Helsinki Committee for Human Rights in RNM and the Civic Center for Freedom “Civil”. Public support was also provided by F2N2’s team, who are part of the fight against false news and disinformation.

Reactions for support and calls to the authorities to take measures were sent by the EU Ambassador David Geer, including the British Ambassador, Rachell Galloway.

Similar message for support and call to the authorities arrived from „Global Voices“, an international organization for civic journalism that is publishing articles in 40 languages and is a longstanding partner to Metamorphosis Foundation.

Otherwise, the general public knows that during the rule of VMRO-DPMNE when it was led by the runaway former Prime Minister Nikola Gruevski, the threats on the lives and the calls for lynching journalists were a regular sight. Such was the case of Borjan Jovanovski when in April 2015, while his wife and children were at home, in front of their door a funeral wreath was left containing te insignia “Last Farewell.” In December 2016, a campaign was started on social media with photographs of NATO and EU Ambassadors designed as obituaries, in a similar way as the photographs of Metamorphosis Foundation staff’s photographs were shared.