Meta.mk
Ctrl - Z Egyptian vultures flying for their survival – and races on 3 continents... Under the motto a”The birds connect the world“, the Macedonian Ecological Society is inviting everyone on the 10th of October, the World Migratory Bird Day, to run or walk a mile. The event, which is taking place on three continents, Europe, Asia, and Africa, is organized to raise awareness of the danger of the survival of the vultures, which during the summer period can be seen in North Macedonia.

“Each year, these birds are embarking on their journey that is longer than 2.500 km towards Central Africa, where they are spending the winter. Regarding the World Migratory Bird Day, on the 10th of October, we are inviting everyone to join us in the “race with the Egyptian vultures,” where we will join forces to outrun a team of three Egyptian vultures, Jenny, Solomon, and Izzy, who have started their race from Africa and their progress will be monitored with the help of GPS devices,” informs MES and stressed that last year, 4.000 people from 6 states took part in this event. 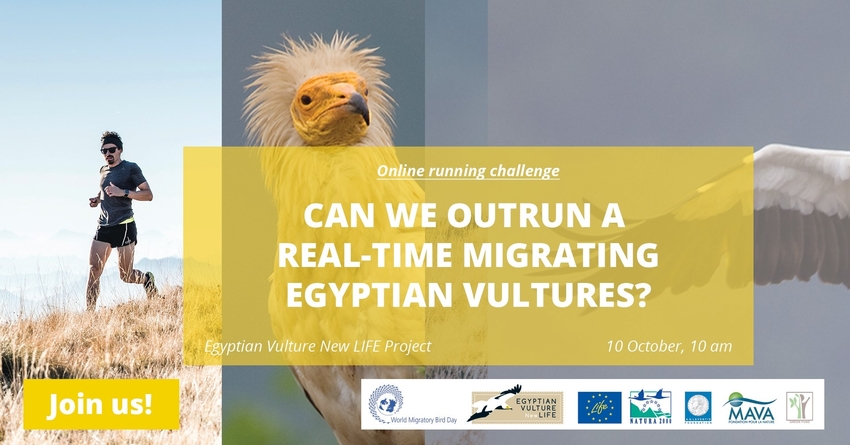 This year, the running will be organized across many states in the Balkans, the Near East, and Africa, and organizers of the event are nine NGO’s from Macedonia, Albania, Bulgaria, Greece, Nigeria, Ethiopia, Kenya, and Lebanon.

The civil society organizations consider it is high time to turn the general public’s attention towards these birds which is very important in the food chain and are near extinction. Throughout the world, the number of vultures has been drastically decreased, and the main reason for that is the anthropocentric factor.

As a result, two types of vultures were extinct, and the population of the Egyptian and White-headed vulture has been decimated. The Egyptian vulture has a status of globally endangered species according to the International Union for the Conservation of Nature (IUCN) and is a protected species according to the Bonn and Bern International Convention. According to our legislation, this vulture is on the list of species under strict protection and Macedonia remains one of the last countries in the Balkans where this bird can be seen.

In Macedonia, the event in the support of these birds is promoted under the motto of “Can we run together faster than the Egyptian vulture during the migration?” Everyone that wants to make a symbolic contribution in the fight for the survival of the Egyptian vulture or to walk 1.6 km can register themselves at фејсбук MES’ page, and an official number for the race is granted on this link -https://forms.gle/NDZaPQNt7sYj9U9u8.

If they want to, the participants can also take a runner’s shirt at MES’ office. The race is planned for the 10th of October at any location, street, park, or somewhere in nature. The route can be recorded with any running application and the photographs, the videos and the results can be shared on social networks with the use of the following hashtags #𝗮𝗺𝗶𝗹𝗲𝗳𝗼𝗿𝘁𝗵𝗲𝗘𝗩, #𝗔𝗠𝗙𝗧𝗘𝗩 #𝗘𝗩𝗡𝗲𝘄𝗟𝗜𝗙𝗘, #𝗪𝗠𝗕𝗗𝟮𝟬𝟮𝟬.