Meta.mk
MKD Dimitrov: If no date is given in October, then the nationalists and...

If we have no perspective, and that is the stake of getting the date for the start of the negotiations with EU in October, we shall grow weaker, and the sceptics, the nationalistic forces and populists will get stronger. That will help those that doubt the European project, which is our strategic orientation, while on the other hand a positive decision will help us to say that the matter is in our hands, said the Foreign Policy Minister Dimitar Dimitrov in an interview for Agency Europe.

He states that North Macedonia completely supports the European integration of Albania, but the country mustn’t be a victim of the logic of putting countries in packages and reminds that the process is based upon individual achievements.

Regarding the delay of the decision in June earlier this year, Dimitrov thinks that the ministers didn’t have enough time to see the advancements in four key areas that were defined in June 2018 due to the shorter deadline between the publishing of the European Commission’s report and the session of EU Council. Still, reminds Dimitrov, October is crucial, and the eventual failure to give a starting date for the negotiations with the EU will mean opening a space for the advancement of the nationalists and populists.

– It won’t be easy for me, as a minister, to return home after October and to say that the EC will be deciding about it next year and we will need more political fuel in order to continue walking forward – said Dimitrov.

Žbogar: We are expecting to see again a higher standard of organizing elections 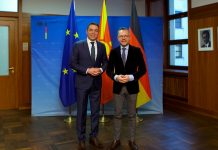 Macedonian Foreign Affairs Minister Nikola Dimitrov meets with the German Minister of State Michael Roth: We shall continue with the joint efforts to move...