After the president of the United Macedonian, Meto Koloski today on his Twitter account challenged the US Embassy and Ambassador Jess Baily, saying that “a Twitter war had begun between the embassies of the United States and Russia over air pollution problem in the country”.

Twitter war between U.S. and #Russian Embassies in #Macedonia over air pollution problem in the country. @FedericaMog@jensstoltenberg@NATO@USAmbNATO@AmbBaily@StateDept@statedeptspox#NATO#EUpic.twitter.com/13sozRwXkE

Ambassador Baily was quick to respond and tweeted:

Not Twitter war. We asked Macedonia’s citizens a question about near term steps to clean air. Another Russian pipeline won’t do that. The U.S. supports Macedonia’s desire to bring gas to Macedonia’s cities and a diversity of gas supplies for Macedonia and Europe. https://t.co/pMl0aeyB9F

A few hours later a response from the Embassy of the Russian Federation in Macedonia followed:

“As our friends from the US Embassy are searching for ideas for the air pollution in Macedonia we want to help with a solution. A Turkish Stream” 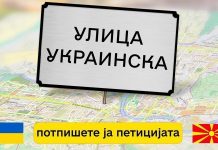