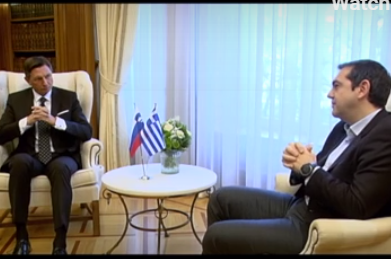 At today’s meeting at the presidential palace in Athens with the Slovenian President Borut Pahor, Greek Prime Minister Alexis Tsipras expressed his satisfaction that the plan for constitutional changes at his northern neighbors is progressing rapidly.

At the same time, Tsipras lobbied at the Slovenian statesman that “the country that he now addresses with its constitutional name i.e. as Macedonia in the future will have to address as “North Macedonia.”

Tsipras has said that in the Balkans with its initiatives it has been working on the improvement of the cooperation, but most important is the agreement signed with FYROM in 2018, informs the Greek daily newspaper Kathimerini.

-It means that you and Slovenia, which is one of the countries that recognize our neighbors under their constitutional name i.e. Macedonia from this moment on you will address it as North Macedonia because that is very important for the Greek nation because Macedonia apart from being a big geographic area in Greece, a region in Greece, is also an important part of the ancient Greek history, and that is recognized with this agreement, for which I hope is with an evened approval from both sides – Tsipras told the Slovenian president.