Today, Slobodan Bogoevski will be called to testify at the trial over the ‘Magyar Telekom’ affair, for organised crime and corruption.

Mr Bogoevski, who is serving a prison sentence in the Kumanovo prison on other charges, will give his testimony to the Prosecution at a New York Court today, through his statement today, where he states that the current and former officials in 2005 were paid ‘backhands’ from “Magyar Telekom” through Greek businessman Mr Kondominas. 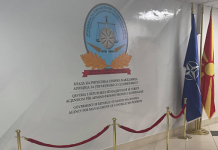