Meta.mk
MKD Mickoski: Macedonia did not receive a date for negotiations, but a date...

The agreement with Greece is a capitulation and VMRO-DPMNE will not participate in the work in sessions regarding this agreement, said the leader of VMRO-DPMNE Hristijan Mickoski at today’s press conference.

Mickoski also said that Macedonia has not received a date for negotiations, but a date for an assessment of the situation.

“Macedonia did not receive a clear recommendation right away, as Zoran Zaev and his Government promised, but only the hope that this time next year, we will fully meet the criteria for determining a date for negotiations. Macedonia, in effect will be left ‘running on the spot’, because according to the report, more progress needs to be made in the fight against corruption, substantial reforms in several areas and the creation of conditions for an independent judiciary. This incompetent Government has not met the criteria and this is patently obvious”, stated Mickoski.

According to him, the overall plan is to sell-out the country, the trade of national and state interests and on a domestic level – an economic tsunami.

“Zoran Zaev created the circumstance for concessions, where he agreed to erase the name Macedonia, change the Constitution, enabling the change of the constitutional name, altering the broad interpretation of the identity, making the Macedonian language a footnote as well as a series of other deviations and nothing in return even though he promised a bright future, a better life, and what’s more, it was going to happen immediately”, said Mickoski.

He told the Government “instead of wasting time on political persecutions and violent scenarios, just get the job done.” 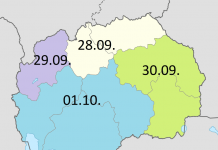