In the third part of the “mega-interview” for the online edition of the weekly news portal “Republika“, VMRO-DPMNE leader, Nikola Gruevski discusses bilingualism, cantonization, the differences in understanding patriotism, as well as the “manipulation of the term by from Soros”.

Gruevski says that what scares him the most concerning the concept of cantonization is the “disintegration of the state.”

When asked why and how Switzerland or Belgium have not disintegrated, he says it was because of “the huge difference between us and them”.

“Firstly, we live in a turbulent region, with many radical structures and a history of many conflicts. Some of the neighbouring states, still see Macedonia, and parts of it, as possible future prey. It is no accident that the Macedonian question is yet to be closed. A canton is a state within a state, which has the right to self-govern up to separation. And this is the Balkans. We do not have 60,000 euros per capita GDP, so this is our cohesive factor. Look at Bosnia, it is a canton state. If Belgium’s or Switzerland’s standards were to fall to 5,000-6,000 euros per capita GDP, watch what will happen to their cantonal system. So, my position and the position of VMRO is not against Albanians, but it is aimed at preserving the integrity and unity of the state. And every Albanian who wants to live in this country and not in another country, should know that we are on their side, and not against them”, said Gruevski.

Referring again to the question whether Gruevski is a patriot or a nationalist, he says that in a time our identity and name is not recognized, Soros NGOs propagate and impose a sense of shame, they create this display as if it is beneath them to have strong views on such topics and fight with all their strength to bring down the VMRO-DPMNE government, as they believe it will be easier to handle SDSM. So, with that goal, “they make us into nationalists, call us undemocratic, a regime, criminals, bad people, they spin, and take everything out of context”, says Gruevski.

“Some of the media and politicians who are my opponents, have it imprinted in their heads that I hate Albanians, that I am against them, that I am against Albanian Universities, the Albanian language, the Albanian flag and etc, which is untrue. Completely untrue. Not only untrue, but actually the complete opposite. See, all this is was said by SDSM, a partynwho in the past have proven to be anti-Albanian”, said Gruevski. 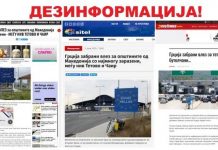